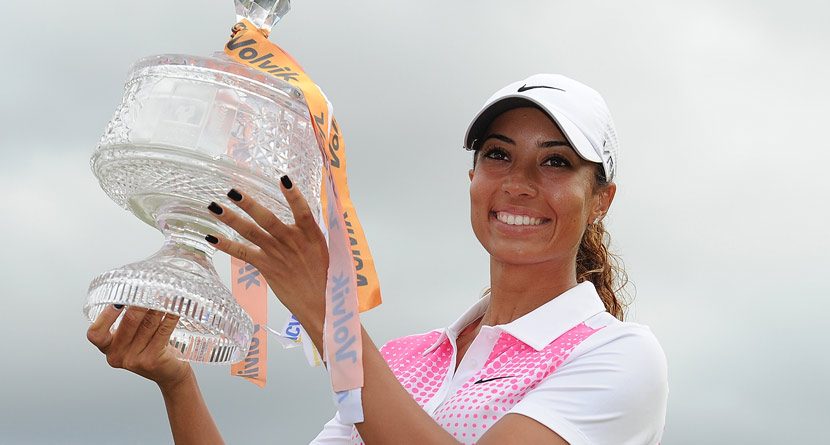 With a 4-under 69 Sunday in the final round of the Australian Ladies Masters, Back9Network ambassador Cheyenne Woods collected her first major tour victory as a professional. Woods’ 16-under 276 at Royal Pines Resort in Queensland’s Gold Coast was two strokes better than Australian amateur Minjee Lee.

“The Ladies European Tour has been great to be able to play this last year,” the 23-year-old Woods said after the triumph. “I’ve been able to see all of these great players, play with Solheim Cup members, so I’ve learned so much from all of these girls and to be able to come out here and actually compete with them and come out on top was huge for me.”

After a wedge shot that she stopped four feet from the cup on the par-5 15th hole, she carded a birdie to push her lead to two. On the par-5 18th, Woods dropped another stroke to match Lee’s birdie and secure the win. Woods began the final round owning a one-shot lead.

Woods, of course, is world No. 1 Tiger Woods’ niece, and carrying the same surname can add some pressure. Cheyenne addressed that Sunday.

“I’ve been pro for two years and, for the majority of it, people just think of me as Tiger Woods’ niece, so now I have a game of my own and I have a title now, a win, which is exciting,” she said. “It’s nice now to say to people that I can play and I’m not just a name.

“Growing up with the last name of Woods, there’s a lot of expectations and pressure and spotlight on you but I always knew that I was able to win. I always knew I’d be able to compete with these ladies, so now it’s kind of a weight off my shoulders because now everybody knows, not just me.”

Way to go @Cheyenne_Woods ! A great win and accomplishment. I’m so proud of you.

I can’t even begin to explain how special today was. Thank you everyone for your support!!! #blessed

The victory awarded Woods $51,000 in prize money and a two-year exemption on the Ladies European Tour. Her first official professional victory came at the 2012 SunCoast Ladies Series LPGA International. But the tour she has her eyes set on is the LPGA Tour. She advanced to the third and final round of 2013 Qualifying School, but could not place among the top 46 that received at least conditional membership.

Woods and her coach think this season could be a turning point.

“All off season I was just getting ready with my coach back home and he told me he thinks that this is my year, my time to finally get a win and to have it this early in the season is exciting, especially with European Tour and then here in Australia. I’m just really proud with how I played this week and followed through all four days and finished strong.”