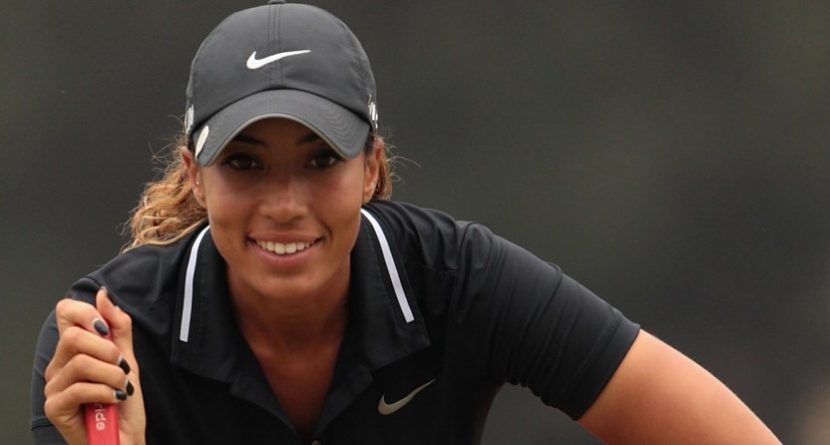 Cheyenne Woods’ goal for the 2014 season is consistency. After missing the cut in her first Ladies European Tour event, she won her second, the Australian Ladies Masters on Sunday, her first professional victory on a major tour.

Obviously, she entered this week’s Women’s Australian Open in Victoria hoping for more of the latter. Unfortunately, an opening-round 2-over-par 74 didn’t fit that bill. Yet the Back9Network ambassador rebounded extraordinarily on Friday with a sizzling 7-under 65.

Woods was cooking from the start. She teed off on No. 10 and sank five birdies before making the turn. On her back nine, she carded three more birdies, with a bogey at the par-3 seventh hole mixed in. Overall, that’s still not the consistency Woods is shooting for, but it’s better to be sometimes up rather than consistently down. Her 5-under score at the midpoint of the tournament leaves her in a tie for 20th and six shots back of the lead, held by Sweden’s Caroline Hedwall, who also recorded a 65. She aced the par-3 16th and eagled the par-5 eighth.

Only Anna Nordqvist of Sweden had a better day, as she played a bogey-free round with eight birdies for a 64. She’s 8-under overall and in fourth place, behind Hedwall, world No. 2 Suzanne Pettersen of Norway (10-under) and Australian amateur Minjee Lee (-9), who was runner-up to Woods last week.

Woods played her first two rounds with American LPGA star Brittany Lincicome and English legend Laura Davies, the winningest player all-time on the Ladies European Tour. Lincicome is tied for 49th at 2-under, and Davies missed the cut at 4-over.