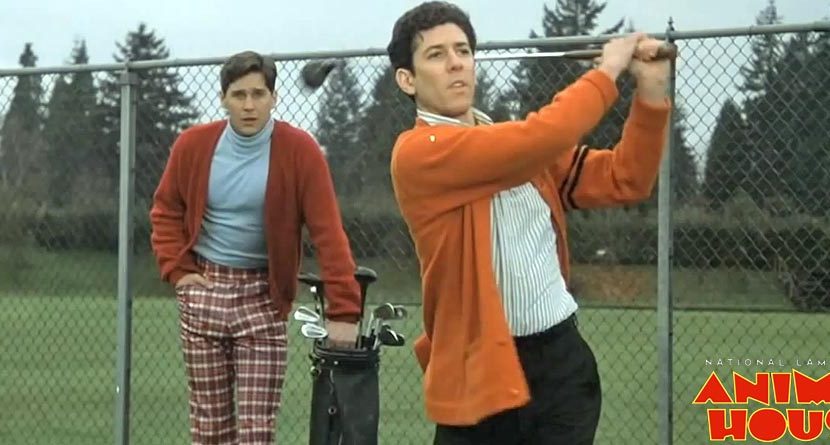 As we know, when it comes to Hollywood, all good things, (and to be honest, a lot of bad things,) deserve a sequel.  There were so many unanswered questions and dangling plot points from our first production, “Director’s Cut: Great Movie Golf Scenes,” that we had no choice but to release a followup.

So turn your ringers off, grab your XXXL popcorn and your $15 bag of Twizzlers while you enjoy reading, “Director’s Cut: Great Movie Golf Scenes 2 – The Sequel.”

“Larry’s not white, Larry is clear.”

Space Jam is an absolute classic, I don’t care what anyone says. So often athletes try to branch out and act (how could we forget Kazaam?) and it bombs, but Jam manages to be funny and entertaining to the very end and the acting isn’t glaringly bad either. Most importantly for this list, it also includes a great golf scene.

Bill Murray steals the movie (as he usually does) with his picture-perfect swing and his delusions about playing in the NBA. Michael Jordan and Larry Bird, both avid golfers, also put their swings on display for all to see.

Golf and James Bond don’t seem like they’d go together, but in this scene from Goldfinger, they work perfectly. Goldfinger and his heavy, Odd job, play Bond for a pricy gold bar under “strict rules of golf.” Without being an over-the-top chase or explosive shoot out, the scene is smart and shows another yet another way the  ever-resourceful Bond can outsmart his enemy.

“What kind of soap do you use?”

This is probably the longest scene on the list without seeing any of the characters actually swing a golf club. Despite the fact that most of us have engaged in questionable behavior on the golf course, be it driving a cart like Jeff Gordon or having a few too many adult beverages, I don’t think many people have taken debauchery to the extremes this group does.

“You kids suck, you’re good at everything.”

Everyone knows Adam Sandler is a big golfer and has been since his days on SNL. Anyone who plays golf is familiar with Happy Gilmore and the swing it spawned. This scene is really done in homage to the Sandler classic, with Rob Schnider and his movie kids all taking their turn at the famed Happy Gilmore swing. And for added awesomeness, Drew Berrymore adds some sizzle to the end of the scene.

The Hobbit, An Unexpected Journey

“I do believe you made that up.”

In this scene from The Hobbit, An Unexpected Journey, Bilbo Baggins is taking a history lesson from Gandalf, where Baggins learns about his great, great, great, great uncle who was large enough to ride a real horse and, oh, also how the game of golf was invented.

“Here, you lost your club.”

Alright, alright… this doesn’t really have much to do with golf other than that they’re at a golf course driving people insane, but it still makes me laugh every time I watch it. To be fair to the victims, anyone who takes their golf seriously would probably react the same way. The funniest part of the scene is Johnny Knoxville’s explanation for firing off the airhorn: “I have bursitis.”

This scene is the shortest on the list but we’ve all wanted to do this to someone we know. Cell phones on the golf course are an abomination. AN ABOMINATION. Clearly, Jason Sudeikis is tired of Justin Long’s egregious use of his cell phone while he’s trying to practice and it’s pretty obvious that he needs it. We didn’t get to see his swing in the scene from Hall Pass, but he did say, “my game can’t get much worse,” so to interrupt this range session with a cell phone is wildly inconsiderate. Ultimately, justice is served.

In this scene from another Martin Scorsese film, the round of golf between Howard Hughes (Leonardo DiCaprio) and Katherine Hepburn (Cate Blanchett) is great. In her day, Hepburn could flat-out play and had a pretty good swing. Blanchett does a pretty good job of capturing the swing but does an even better job of portraying Hepburn. We also learn from watching that this is at least one thing Leo isn’t great at.

“Don’t think of it as work; the whole point is just to enjoy yourself.”

The final movie on the list is Animal House. This film has so many classic scenes that the golf nearly gets overlooked. The swing of Donald Shoenstein (Peter Riegert) is pretty solid here. He takes his own advice of hitting through the ball to get the desired result.

While it’s not the funniest golf scene or funniest scene in the movie, it’s very much a classic bit in one of the all-time great comedies. It’s also a bit of glimpse into the future for Animal House writer Harold Ramis (R.I.P.), who went on to write and direct Caddyshack.