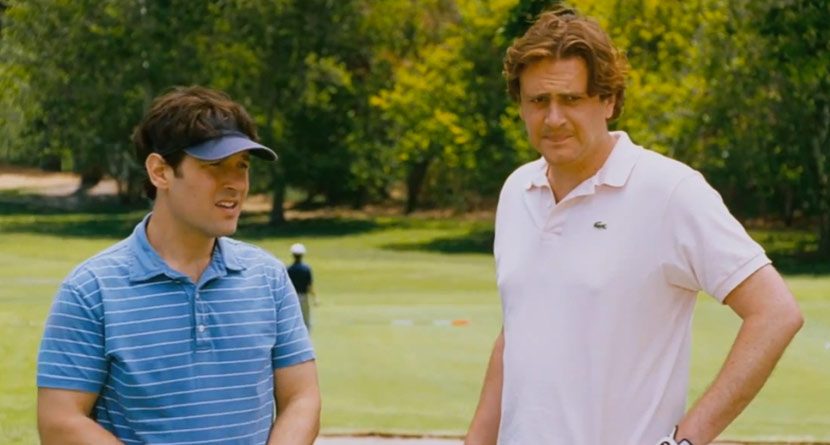 There are all kinds of sports movies. They come out each year and have one thing in common:  usually, they’re not about golf.  No real, notable golf movie has come out since “Seven Days in Utopia” which was a very solid golf film, in my opinion, but other than that, nothing.

Something that does happen a lot are golf cameos. Not golfers popping up in Hollywood blockbusters per say, but the game itself. Sometimes, especially Saturday mornings at your muni track, it seems like everyone plays golf. So when the game pops up in our favorite TV shows or movies, it’s fun to see just what kind of game these celebs have.

Check out some of our favorite golf cameos.

(Warning: Some of the scenes below include language that might be considered NSFW… depending on where you work of course.)

The Departed: “She’s a Dawctah”

The film Martin Scorsese FINALLY won Best Director for also features a brief scene at the driving range, and while it may not be one of the best uses of golf in a movie, it did give us a look at Alec Baldwin’s swing. His co-star here, Matt Damon, is no stranger to swinging the sticks on camera, but Alec doing so isn’t so easy to find. Ultimately, Baldwin’s swing doesn’t look too bad. Nothing enviable, but serviceable. Certainly one a man as busy as Mr. Ellerby, (Baldwin’s character), would be proud of.

Jon Favreau and Ron Livingston discuss work and women on the links in this scene from Swingers. Not that you get to see any real full-swings here, it’s still a great scene. Most guys use their weekly round to vent about work and a woman, so seeing these two discuss their problems over a different kind of round seems very real. I will say, however, that the dress code is a little too lax wherever they’re playing. Seriously, it looks like they just woke up.

Sideways: “What’s with the hostility, man?”

Paul Giamatti and Thomas Hayden Church put on an exhibition we’d all like to do sometimes. We’ve all been hit into and we’ve all received unsolicited tips on the golf course and we know that few things are more upsetting. I’m sure everyone who’s played more than one round of golf has wanted to go charging after the trailing group with their driver like they were Mel Gibson in Braveheart running towards battle.

It’s no secret that Bill Murray is an avid golfer and takes every opportunity to showcase his game. Usually, it’s at the AT&T Pebble Beach Pro-Am, an event which he and DA Points won not too long ago. No words are required in this scene from Sofia Coppala’s 2003 gem, as Murray enjoys a round of golf in the shadow of Mt. Fuji in one of the most aesthetically pleasing golf scenes on film. There’s no need to dissect Mr. Murray’s swing as it’s hard to argue with his skills.

I Love You, Man: “This is my nightmare!”

For anyone who’s ever played with someone who didn’t understand your obsession with golf or took too many waggles between shots, this scene is perfect and easily stands out as one of the funniest in the movie.  Jason Segel’s insincere “please come back” and “don’t go” are hysterical. I’m also not so sure anything was doctored with the result of Rashida Jones’ shot into the green. Short backswing, sure, but she really followed through nicely, generated some good pop. And as we all know, it’s not how you start, it’s how you finish.

Casino: “He’s got every cop in the state out looking for him and he’s out playing golf.”

The second of two Scorsese films on the list, Casino features an amazing scene where Joe Pesci’s ‘Nicky’ is playing golf when the feds land a plane on the fairway. Pesci has a pretty solid golf swing in the scene, one that might be better if he didn’t spend so much time spying on the spies who spy on him. Pesci plays fairly often in real life and is reported to carry a 14 handicap.

(Click here to watch the clip and be ready to wash your ears out with soap when you’re done!) There’s Something About Mary: “…Hit a house!”

One of my favorite scenes in all of cinema happens just after the driving range scene in There’s Something About Mary. If you haven’t seen it please, do yourself a favor. Cameron Diaz shows off her golf swing while creeper Matt Dillon asks for tips and lies about living in Nepal and being an architect. Mary’s (Diaz) big tip is “don’t talk in someone’s back swing,” one which Dillon continues to ignore. The scene that follows is arguably the best in the entire movie. Oh, and respect to Matt Dillon’s mustache here. Just classic, one of the best movie stache’s ever. The Coen Brothers cult classic has very little to do with anything other than bowling and we never do see any of the stars swing a club but the highlighted line, “obviously, you’re not a golfer” is enough for this to make the list. Lebowski is a film that gets better every time you watch it and is filled with one-liners from start to finish.

Starsky and Hutch: “I know even more about grass.”

In this scene, Snoop Dogg is caddying for Reese Feldman (Vince Vaughn) and delivers the tongue-in-cheek line, “I know even more about grass,” in reference to his odd choice of club. Vaughn hits a brilliant shot into the green thus keeping Huggy Bear’s (Snoop) cover from being blown. The most important thing in this scene though, is Vaughn’s swing. Nothing that’ll blow you away, too long going back, folding the left arm… typical amateur issues and easy enough fixes. I’m not entirely sure that the result of that swing would be as good as it was in the movie but hey, that’s why it’s a movie, right?

So, this scene didn’t actually end up in the final product of Tom Hanks film That Thing You Do but this clip did survive and it gives us all the chance to look at Charlize Theron.  Apparently, she almost took out Tom Hanks as a result.

The Sweetest Thing: “I AM NOT AN ANIMAL!”

The best part about this scene is easily Jason Bateman’s hat. I would pay a king’s ransom to own that hat and proudly wear it every time I played golf.  Clearly everyone who’s seen Star Wars and plays golf has had a light saber battle with their clubs and everyone has tried to hit the ball collector at the driving range. I will say, at the very, very end of this clip, we see a very athletic looking swing from Bateman. Maybe a little too much separation between that back elbow but let’s not be too picky.

What are some of your favorite golf scenes from the movies?  Hit us up on Facebook or Twitter with your comments and suggestions.