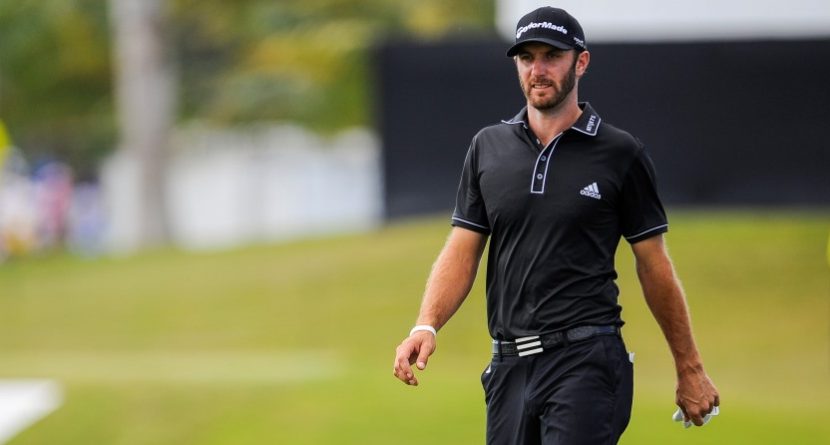 For a professional golfer who hasn’t played tournament golf since July, Dustin Johnson has sure been busy popping up in headlines the past few months.

It started with his leave of absence to “seek professional help for personal challenges” at the end of July, which was quickly followed by reports that he was actually suspended by the PGA Tour due to failed drug tests. Regardless, Johnson vowed to his future father-in-law, Wayne Gretzky, that he’d become more responsible, partly because he had just found out he was going to be a father. TMZ snuck up on Johnson and fiancée Paulina Gretzky at an airport, but failed to get much information out of the couple.

Then, earlier this month, Johnson filed an embezzlement lawsuit against a former member of his foundation, and also reportedly beat one of Tiger Woods’ golf records. Johnson is now expected to return to golf in February at Torrey Pines, but that all depends on the arrival of Baby Johnson. No one knows for sure because hardly anyone has spoken to him.

All the while, we learned Wednesday, Johnson has been in the process of selling his waterfront mansion in Jupiter, Fla. According to the L.A. Times, his six-bedroom, eight-bathroom, 7,860-square-foot property sold this week for $5.2 million.

You can catch some glimpses of the spectacular home in this video (which was released in January, well before Johnson’s tumultuous personal life came to light): The Mediterranean-style home was built in 2007 and purchased by Johnson in 2011 for $3.7 million. He originally listed it for $6.5 million but took it off the market in July. It was then sold privately to Alexandre Ismail, president and chief executive of Honeywell Automation and Control Solutions.