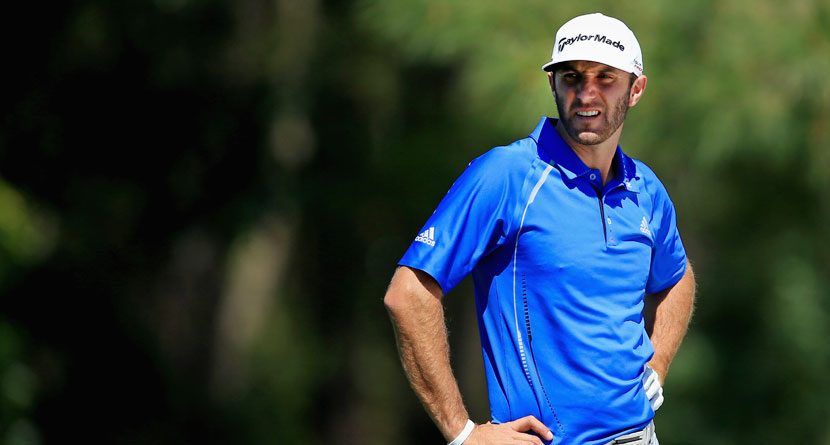 Earlier this week, the PGA of America announced that the top 100 players in the Official World Golf Ranking would be taking part in the season’s fourth major, the PGA Championship at Valhalla next week. “Barring any withdrawals before the opening round, this would be the first time any major championship would feature every one of the top 100 world-ranked players,” the announcement read.

Well, the first – and hopefully only – withdrawal came Thursday. World No. 16 Dustin Johnson will be “taking a leave of absence from professional golf, effective immediately,” according to a statement released by his management team. He will miss not only the PGA Championship, but also the Ryder Cup in September.

“I will use this time to seek professional help for personal challenges I have faced,” Johnson said. “By committing the time and resources necessary to improve my mental health, physical well-being and emotional foundation, I am confident that I will be better equipped to fulfill my potential and become a consistent champion.

“I respectfully ask my fans, well-wishers and the media for privacy as I embark upon this mission of self-improvement.”

As of Friday, Johnson ranked fifth in the U.S. Ryder Cup rankings. His absence means captain Tom Watson will have to make due without one of the biggest hitters in the game.

“We will certainly miss Dustin Johnson at Gleneagles, and we wish him the best,” Watson said in a statement. “As one of the longest hitters in the game with an undefeated record of 3-and-0 at Medinah in 2012, he has clearly been an asset for the United States team.

“That said, the United States is a team with an abundance of talent. I am looking forward to teeing it up alongside those players in the PGA Championship at Valhalla, and finding out along with everyone else, which players qualify for the team based on points.”

Johnson will also miss the PGA Tour’s season-ending FedExCup Playoffs, which start in three weeks at The Barclays. Johnson ranked fourth in the FedExCup standings.

In his last four starts, Johnson placed fourth at the U.S. Open, 31st at the Travelers Championship, 12th at the Open Championship, and he missed the cut at last week’s RBC Canadian Open. His 2013-14 season began with a victory at the WGC-HSBC Champions in November, the 30-year-old’s eighth career PGA Tour win.

On Monday, Johnson withdrew from this week’s WGC-Bridgestone Invitational due to personal reasons, then was spotted caddying for his fiancée, Paulina Gretzky, later that day. The two are slated to be married sometime this fall.