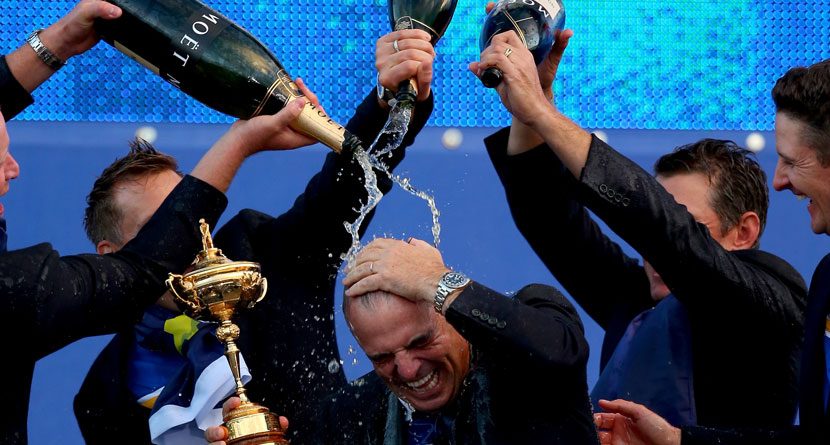 Jamie Donaldson won the 40th Ryder Cup for Europe with a stunning approach that finished so close to the 15th hole that his opponent, Keegan Bradley, didn’t even make him putt it. Winning 16 1/2-11 1/2, it was Europe’s eighth success in the last 10 Ryder Cups.

Paul McGinley hoisted the Ryder Cup high above his head at Gleneagles but, at the end of it all, he and his European team knew that they had been in a scrap.

When he sits down and reflects on the past three days, U.S. captain Tom Watson will surely regret putting Phil Mickelson and Keegan Bradley out in the Friday foursomes at the expense of Jordan Spieth and Patrick Reed and must rue his decision not to play Mickelson at all on Saturday.

In the end, they were the decisions that swayed this event the way of the Europeans.

Spieth and Graeme McDowell traded blows all day in the first match out. The American quickly established a three-hole advantage but McDowell won four straight holes to go 1-up. Incredibly, McDowell went 2-up with a birdie at the 15th and closed the match out with a brilliant par putt on 17.

There were tears in his eyes as he said: “I got off to a slow start. Jordan missed a putt to go four up and that was massive. It was the turning point for me. This is what we play for, this is what we practice for. I am so happy.”

Behind him, Reed led by two on Henrik Stenson after 12 holes, while Rory McIlroy was putting Rickie Fowler to the sword. McIlroy was 5-up after six holes with four birdies and an eagle. When they reached the 13th, it was all but over.

The world’s No. 1 player put the first point on the board for Europe when he beat Fowler 5 and 3. He was 8-under par.

“It has been incredible to play in front of these fans,” McIlroy said. “To be honest, I was more up for this day than I was even for the last day of The Open. I really wanted to go out there and play well today.”

There were fireworks in the match between Hunter Mahan and Justin Rose. Rose could do little could do against Mahan, who was four holes up after six thanks to four birdies. Did Rose have anything left in the tank? You bet he did. He birdied the next five holes and went to the 12th all square.

Mahan must have been shellshocked but he birdied the 14th to go 1-up again.

Mickelson took an early advantage on Stephen Gallacher but the Scot dug deep and had got the match back to square by the 11th. Martin Kaymer took on Bubba Watson and was 4-up at the turn.

The only match in which the Americans were dominating was the clash between Matt Kuchar and Thomas Bjorn. Kuchar was 3-up at the turn, with the help of an eagle at the eighth hole.

Elsewhere, Jamie Donaldson was 3-up against an out-of-sorts Keegan Bradley, Sergio Garcia was 1-down to Jim Furyk, Ian Poulter was up on Webb Simpson, Jimmy Walker was 1-up on Lee Westwood and Victor Dubuisson and Zach Johnson were all square.

In his match against Watson, Kaymer played a brilliant shot at the 13th from behind a bush to set up a birdie, but the American matched it. They halved the 14th, meaning Kaymer was dormie four.

The Americans got their first point on the board when Reed outlasted Stenson. The young American made mistakes, but eight birdies more than made up for them. At that stage, it was 12-7.

Next to the final hole came Rose and Mahan with the American 1-up and only requiring a halve to win the match. Four years ago at Celtic Manor, Mahan fluffed a chip that effectively cost America the Ryder Cup. Incredibly, he hit his greenside chip clear across the green. He ended up with a bogey and they finished all square.

Rose, who finished with four points for the event, said: “I just kept working my tail off to get back into the match, and I was really proud that I was able to do so. I just want to thank all the fans for their incredible support.”

Results were coming fast now and Mickelson won three holes in succession to beat Gallacher, and Kuchar closed out Bjorn.

Kaymer then produced perhaps the moment of Ryder Cup when he drained a pitch at No. 16 for an eagle to beat Watson 4 and 2.

“I played really well today and to chip it in like that was very, very special,” Kaymer said. “The support is incredible. It gives you goosebumps walking down each fairway.”

So where was the winning point going to come from? Garcia trailed Furyk, but Poulter and Simpson were all square and Donaldson was 4-up against Bradley. Westwood was three down to Walker and Dubuisson and Johnson all square.

Garcia pulled Furyk back to all square at the 15th and then went 1-up with an eagle at the 16th. When Bradley failed to birdie the short par-4 14th, Donaldson was left with a putt from 10 feet to win the Ryder Cup for Europe, but just failed to hole it. Four up with four to play, he was guaranteed half a point and the trophy was certain to be retained.

Donaldson’s approach on the 15th finished stone dead, and it didn’t matter what Bradley did now as he conceded the hole, match and the cup.