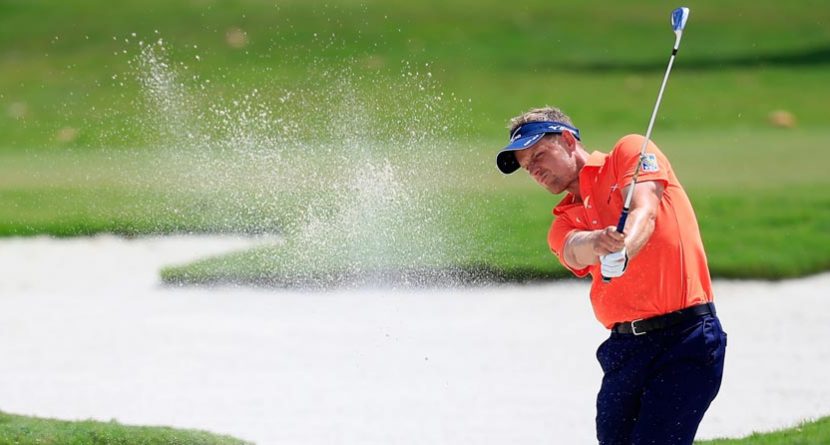 The newly-redesigned course at Doral is playing tough.  Really tough.  The scoring average for the second round Friday was 76, a full four strokes above par.  Only three players were under-par Friday and an absurd number of golf balls found the water…113 in all.  For former world No. 1 Luke Donald, he had to deal with more than just the course en route to his 10-over 82 Friday.

At the par-5 10th hole, Donald hit his drive into the right rough and found an unusual hazard.  A female wearing a backward-hat found the shiny, dimple covered ball and decided to pick it up and walk off with it.  The girl cheered with her friends as though she found a “diamond in the rough” (pardon the pun).

The girls nearly got away with a souvenir, until a big, bad cameraman raced over and told them to put it back where they found it.  Luckily, Donald was able to come away with par, but he finished the day nine shots back of the lead.

A golf tournament probably isn’t the best place to pick up a golf ball you find on the course, so hopefully these fans learned their lesson.

Donald had a laugh about the situation on Twitter after his round, and seemed to be in good spirits after a rough day.

Really tough day at the office, even had 1 of the spectators try 2 nick my golf ball on the 10th! Luckily thr is always tmr! #82 #Only9back!