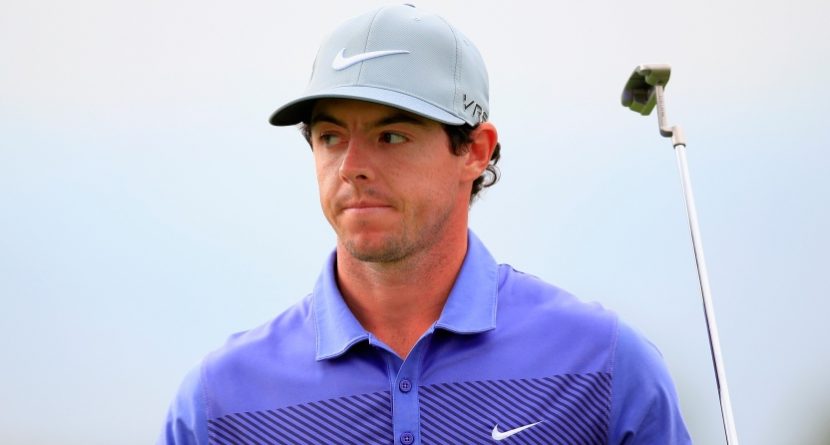 Through one round at the BMW Championship, Rory McIlroy, to no one’s surprise, is in the lead. He carded a 3-under-par 67, tied with Jordan Spieth and Gary Woodland.

But the world’s No. 1 player was “a little frustrated” afterward. That’s because through 15 holes he was 5-under. Two bogeys in his final three holes capped his day.

“I feel like it should have been better than what I finished,” McIlroy said. “A sloppy bogey or two out there. … But you can see by the scores, it’s pretty tricky out there and low scores aren’t really too easy to come by. So a 67 is a really good start, even though it could have been a bit better.”

It would have been a bit worse had McIlroy let his frustration overtake him. On the par-4, 448-yard 16th, his seventh hole of the day after starting on No. 10, McIlroy shanked his drive on the dogleg right. He then took another swing – this time punching his club into a cardboard partition, according to a fan. Here’s the aftermath: He’d go on to make par on the hole, and then birdie No. 17 to move to 2-under. After McIlroy made the turn, he birdied Nos. 1, 2 and 3. And on the fifth hole, he saved par after this masterful shot: