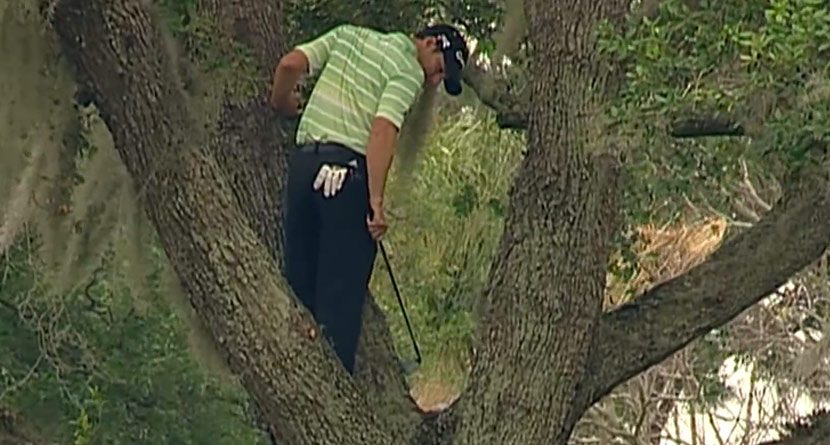 Here is a rundown of 13 crazy – yet memorable – moments from the 2013 season. Did we leave any out? Let us know by commenting on our Facebook page!

Tiger and Kuchar’s Ridiculous Handshake at President’s Cup – OK, so it wasn’t really a “handshake”, but Tiger Woods and Matt Kuchar gave new meaning to the term “Golf Nerds” with their rendition of the Fresh Prince of Bel-Air celebration at the 2013 President’s Cup.

President’s Cup Streaker – And we have yet another gem from the President’s Cup, this time in the form of a female streaker during Sunday’s final matches. If nothing else, this young lady ran incredibly fast before being apprehended by on-course security. Rules Violations All Over the Place – It seemed as though a majority of pro golfers completely forgot how to play by the rules in 2013, but none was more evident (and deliberate) than the European Tour’s Simon Dyson. Sorry man, but you simply cannot tap down a spike mark on the green, let alone in the direct line of your putt.

Zach Johnson’s Amazing Par at Sherwood – It didn’t happen until December, and it was in what many believe to be an exhibition tournament, but Zach Johnson’s amazing hole-out for par on his 72nd hole at the Northwestern Mutual Challenge was one of the greatest golf shots you’ll ever see.

Sergio’s Meltdown at The Players – Weeks after getting himself into hot water for some rather “colorful” remarks about Tiger Woods, Sergio found himself in contention at the 2013 The Players. That is, until he dunked two balls in the water on 17. Oops.

Sergio Hits Out of Tree – Sergio had an even crazier moment in 2013 when he climbed a tree to hit a backwards golf shot at Bay Hill. I understand that you gotta play the ball where it lies, but how was this going to end well, Sergio? Take the drop!

Patrick Reed’s Clutch Shot at Wyndham Championship – Sometimes you gotta take risks to win on the PGA Tour. This is especially true when you are staring down your first career victory, which Patrick Reed accomplished thanks to this amazing shot at the Wyndham.

Jim Furyk’s 59 at the BMW – A great round of golf is one thing, but shooting 59 in the FedExCup Playoffs… with a bogey?! That’s the definition of insane (plus I got to watch it live).

Anna Nordqvist’s Ace at Solheim Cup – It might not have been a great moment for the US Team, but Team Europe’s Anna Nordqvist ended her match in style with this amazing hole-in-one at the Solheim Cup.

Phil’s Missed Putt for 59 – As crazy as Jim Furyk’s 59 was later in the year, Phil Mickelson’s missed putt for a sub-60 round of his own was even more ridiculous. I don’t think he could have hit a better putt… well, unless he made it, of course.

Jordan Spieth’s Chip-In at John Deere – It might not be as crazy as Zach Johnson’s dunk at the World Challenge, but PGA Tour rookie Jordan Spieth got himself into a playoff at the John Deere Classic thanks to this beauty. He would eventually win the tournament for his first career trophy.

Vijay Singh Sues the PGA Tour – Do we have any idea what Vijay is trying to blame on the PGA Tour with this lawsuit, even months after he admitted to using deer antler spray? I’ve never seen a crazier lawsuit in sports than this, so it had to make my list.