GolfStinks: 5 Ways to Start a Fight on the Golf Course 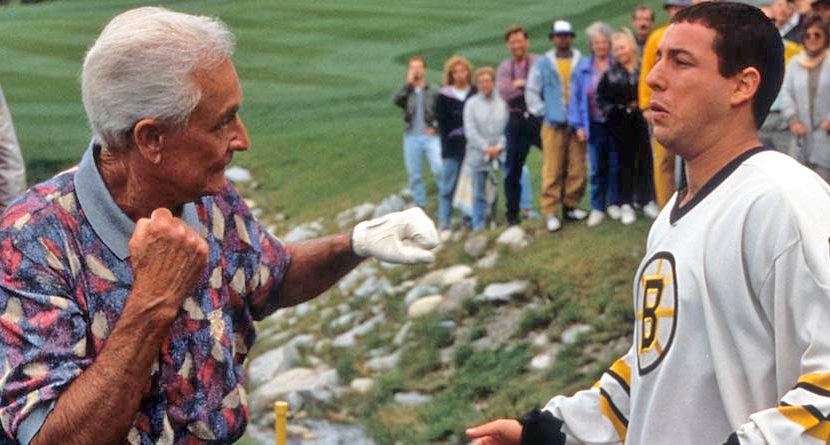 I’ve never seen anyone go full-on fisticuffs at the golf course, but I’ve witnessed a few close calls (most of which happened following one of the 5 events below). You wouldn’t think the course would be a setting for a throw-down, but when tempers flare, anything is possible.

And in golf, tempers most certainly can flare. Imagine this: You’re having a bad round; 4-putted for triple bogey on the previous hole; hooked your drive OB on the current hole and then…

#1 – Someone hits into your group.

I actually hit into the group ahead of me last week. Now in my defense, I wasn’t trying to hasten their pace, rather I didn’t see them in the woods on the left. After a quick apology shouted down the fairway, all was forgiven. But it could have easily gone the other way. Hitting into the group ahead of you can definitely send the wrong message. I remember once we had mistakenly hit into the same group twice.

Though a mistake, I can understand why they took offense. It had been a long, slow round and everyone was annoyed. So when we roped one by them for the second time, the shouting began. We apologized; they didn’t really accept it; and when we drove up behind them to wait on the next tee, words were exchanged. Though tempers eventually cooled, hitting into the group ahead of you is perhaps the easiest way to start a brawl on the course. #2 – Someone steals your ball (or purposely misplaces it).

We’ve all claimed to have this happen to us at one point or another; “I swear it was right here…someone must have picked it up.” Perhaps, or perhaps your drive wasn’t as good as you thought. But when you actually witness the thief in the act, that’s another story completely. You see them heading to your ball from 200 yards away and you immediately know they are going to take it – “Hey!” you yell, “That’s my ball!”

What’s worse, they flagrantly steal your ball because you’ve hit into them! I’ve witnessed this on multiple occasions. I’ve seen people kick balls into the woods or a sand trap for being hit into. And when things like that happen, you’re one step away from a melee.

#3 – Someone steals your club.

A couple of rounds ago, I found an 8-iron on the tee box of a par 3. Obviously, someone brought two clubs with them to tee-off and left behind the one they didn’t use to hit. Now, I did the proper thing. I asked the group ahead of us and when it wasn’t them, I left it with the clubhouse manager after our round. But what if I didn’t do the “proper thing?” What if I needed an 8-iron and decided to claim that club as my own? Well, one time I witnessed a confrontation in the course parking lot where one guy spotted his club in another guy’s bag. Clearly you can assume the guy with the club planned on taking it (after all he was already at his vehicle with his trunk open). The two exchanged words with the accused using the excuse that he simply “forgot” to leave it at the clubhouse when he finished (which was possibly true). But I remember thinking “this could get ugly” until the club was handed over to its rightful owner who then, after a few more choice words, headed back to his car. Remember, if you find a club, do the right thing.

#4 – Swindle someone out of money.

If you’ve ever played for money, you’ll know there are certain things that cross your mind: Are they cheating? Should you cheat? Will they pay up? Remember, when money is on the line, so is your credibility. And if you prove not credible, then you might have to pay the price (one way or another). Keep that in mind the next time a few skins are on the line.

#5 – Continually pointing out what someone is doing wrong.

One time years ago, when Stinky Golfer Chris was just beginning, he was having a difficult time in the trap. After flubbing a couple, the rest of our foursome (including me) started giving him advice. After each of us served up a bit of knowledge (which was promptly followed by yet another flub), Chris finally had enough: “EVERYBODY JUST STOP WITH THE F*$%ING ADVICE! IT’S OBVIOUSLY NOT F*$%ING HELPING!” Now Chris is a good friend, but at that moment, I think he may have been ready to go 12 rounds with all three of us! Fortunately, we’ve all remained good friends. Unfortunately, Chris’ trap play still needs work.