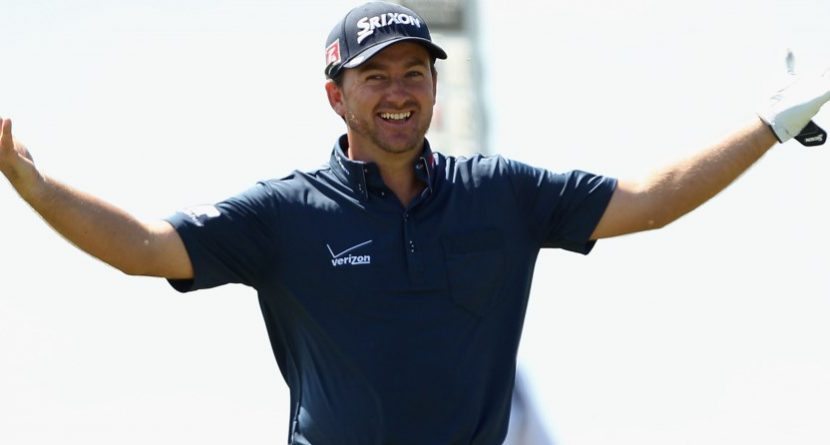 “Honestly, any time you try to predict a match-play event, you’re living dangerously. One Mikko Ilonen topping a Bubba Watson, or Scott Piercy over Justin Rose in the first round and it could spell disaster for a bracket.” – Golfstradamaus, 2/18/14

Well, it wasn’t Mikko Ilonen or Scott Piercy who blew up my bracket, it was Rickie Fowler and Peter Hanson. On day one, I lost both of my picks for the final, confirming what I said about betting on match-play events being dangerous. I’ll take full responsibility for any trouble you may be in this week. Tell your significant other Golfstradamaus made you do it.

That being said, we mustn’t dwell on the past. This week’s Honda Classic presents another shot at glory for the stars of the PGA Tour, and for you and I… and I expect to return to the winner’s circle.

Graeme McDowell always seems to play well at PGA National. His last three starts in the Honda Classic have resulted in two T-9 finishes and a T-6. Few players not named Tiger Woods have enjoyed the success at this track that McDowell has, and because of that he’s hard to ignore this week. The fact that he’s getting 20/1 at a place and in an event where he’s come so close so many times is crazy. In my opinion, McDowell should be getting McIlroy/Woods money this week. They’re going off at 8/1, but with GMac getting more than twice that, I’d put all my shekels on McDowell.

Just because Luke Donald hasn’t played in this event since 2011 doesn’t mean he won’t have a great week this week at PGA National. Donald won this tournament in 2006 and finished second in 2008. In his most recent start here, 2011, he picked up a T-10. Donald’s track record here coupled with the fact that he’s getting 50/1 odds this week makes him a great pick. Despite hitting a bit of a slump last summer, he did regain the form that made him a world No. 1 towards the end of 2012. This week would be a great time for Donald to collect his first PGA Tour win since the Transitions Championship in March 2012.

Only two Americans have won this event since 2005 so I’m going to continue to pick guys born outside these shores. Sergio Garcia tends to play very well on the Florida swing — check out his results by season and you’ll see a lot of top-20 or better finishes in the Sunshine State. He hasn’t played here since 2010 but the longevity of his success is enough to make Garcia a worthwhile bet this week. A Garcia victory is paying 20/1, too, which is a nice return on a guy who ranks in the top-1o in the world and loves playing golf in Florida.

Rory McIlroy is only getting 8/1 this week but that’s because he’s so damn good, especially here. McIlroy won here in 2012 and had a T-13 in 2009 at the age of 20. McIroy gets around PGA National exceptionally well and on a course that can play like a major with the “bear trap” (holes 15, 16, and 17) and the par-4 10th hole (which ranked as the second most difficult non-major hole on tour last year) lurking on Sunday, you want your money on a guy who can handle that pressure. I know I pick him a lot but it’s because he’s the best player in the game right now not named Jimmy Walker. Do yourself a favor: Go with Rors.

My last pick this week is someone who should be on everyone’s radar by now, and especially this week, despite the lack of American success in this tournament over the last decade or so. Chris Kirk is now a two-time winner on the PGA Tour and had played solidly all season. He sits fifth in FedExCup points and won the McGladrey Classic early in the 2013-14 season. Kirk has made the cut all three times he’s played the Honda, finishing T-29 in 2011. While his history here isn’t staggering, it is steady. The fact that he played well here consistently before he found his form late last year bodes well for Kirk now that he’s playing so well and returning to a course he enjoys. At 50/1, Kirk is a steal.

There you have it, kids. Do yourselves a favor and forget all about last week. The WGC-Accenture Match Play Championship yielded some of the best golf of the year — except that I didn’t win any money on it. This week will be a much different story. I can only hope you’re wise enough to listen up. Until next time, dear friends and degenerate wagerers…

Other Hot Links:
– What If the PGA Tour Held a NFL-Like Combine?
– Who Is the Jadeveon Clowney of Golf?
– It Takes Two: Friends Team Up For Amazing Trick Shot
– Tweek in Review: The Week’s Best Tweets
– Top 11 Most Memorable Caddyshack Moments