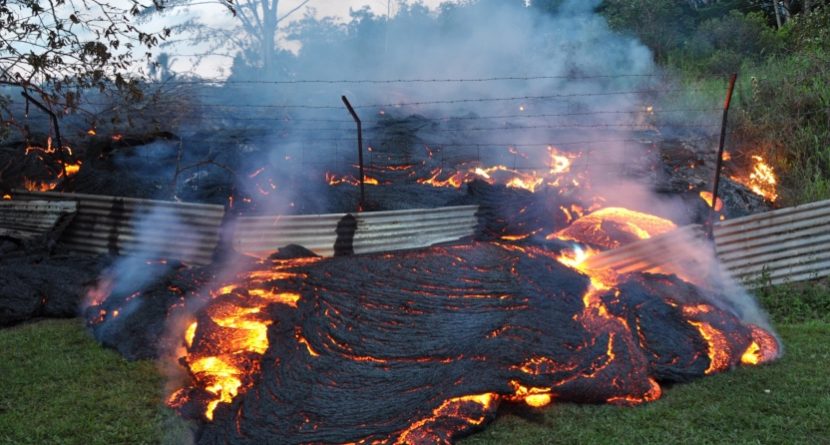 Back in June on Hawaii’s Big Island, a volcanic crater vented and released a load of lava. The 2,000-degree river has yet to be halted, and it’s now dangerously close to the small town of Pahoa.

Some locals are concerned, others are curious. Despite warnings from police to stay away from any active lava flow, two people wanted to get as close as possible to take pictures. And they brought some golf clubs.

On Thursday, when Hawaii County police responded to a report of two people hanging out by the flow, 65-year-old Ruth Crawford and 59-year-old Stephen Koch were found in a restricted area with two golf clubs that had been dipped in lava. Officers also found molten rock on some household utensils, like an egg beater, in Crawford’s and Koch’s cars.

The two were arrested for second-degree criminal trespassing, and later released after they each posted the $250 bail.

Of course, the question must be asked: Why?

“Just because it’s lava and I’ve been here 23 years and I was kind of excited and scared and just wanted to do it,” Crawford told KITV.

So there you go. Here’s a CNN report on the lava flow:

Here’s a bird’s-eye view of the lava:

And, just because, here’s Fred Couples playing golf this past January next to hardened lava at Hualalai Golf Club in Ka’upulehu-Kona, Hawaii, which is on the opposite side of the Big Island from Pahoa:

Maybe Pahoa will build a golf course around its new natural feature? After the lava has, you know, cooled and stopped moving, of course.

More Hot Links:
– The Clubhouse: Singer/Songwriter Jennifer Wayne
– Jamie Sadlowski Drives A Ball 265 Yards Out Of The Box… Literally
– All Shook Up: Scary Good Halloween Drinks
– Another Week, Another Ace, Another Car For LPGA’s Danielle Kang
– Driving Range: Car Gets Pelted At TopGolf in Houston
– 9 Best Golf-Themed Pumpkin Carvings
– The Fringe: Gary Player Could Fix Tiger’s Swing In One Hour
– The Turn: Back9Network Tears Up The BMW Racetrack