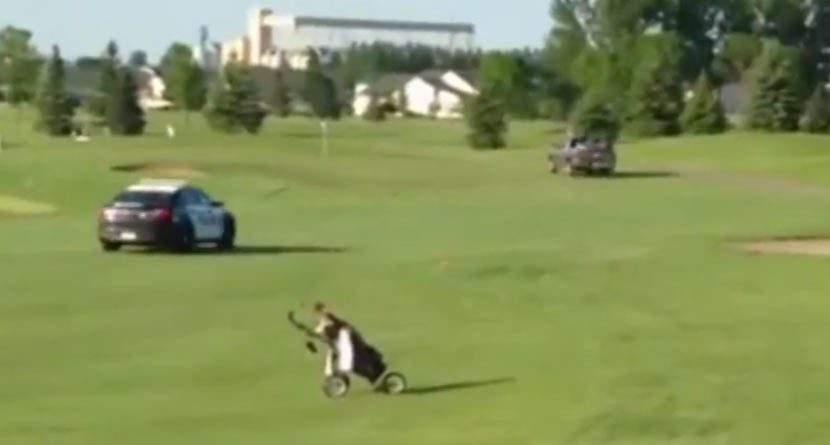 North Dakota golfers got a little more than they bargained for when a real-life version of the “Grand Theft Auto” video game broke out at the Village Green Golf Course in Fargo.

The chase began when police spotted a man with several felony warrants and tried to make a traffic stop. When the man decided that wasn’t what he wanted to do, the chase was on.

Luckily, no one was injured during the chase, which police terminated for public safety reasons shortly after screaming through the golf course. The suspect was eventually arrested at a local shopping mall.

Seeing footage, and knowing that the suspect was later apprehended at an area mall, all I could picture was this:

All joking aside, watching video of the chase is surreal, scary and funny. I mean, it’s not every day you see a high-speed pursuit. It used to feel like every day CNN or some other outlet was covering a high-speed chase after the famous “white Bronco” incident. This want-to-be-O.J.-Simpson has certainly received his 15 minutes of fame for his stunt and I supposed deservedly so.

While his decision to take cops through a golf course was dangerous, it was also clever. If I were trying to ditch the cops, I guess a golf course is as good a place to try and lose them as any. I have to imagine this is the first time this has happened.