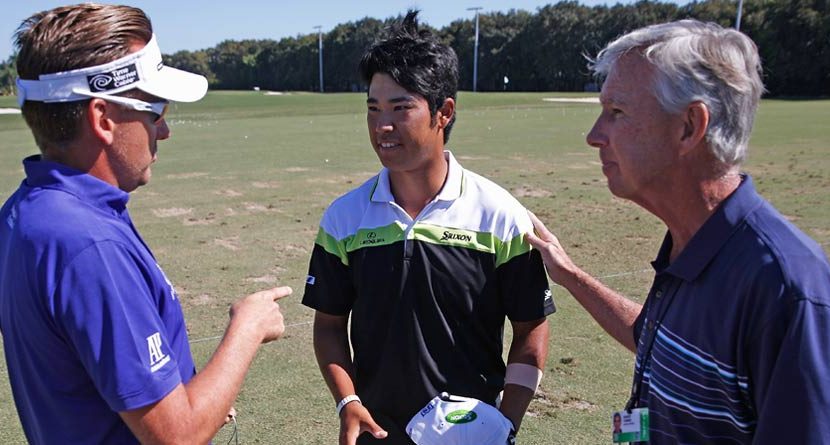 Ian Poulter is playing alongside Hideki Matsuyama during today’s third round at the 2014 WGC – Cadillac Championship. Why is that newsworthy? Because last night, Poulter ripped Matsuyama on Twitter, and it wasn’t pretty.

playing with Matsuyama tomo. He buried his putter in the 13th green 5 ft from the hole, Referee had to repair the crater. Because he didn’t.

Why should Matsuyama leave a crater in the green for others to putt over, or have to call a referee to repair the damage. Idiot.

Im no saint & first to say. But that was disgusting. I wouldn’t bury a putter in a green 5 ft from a hole & have players behind deal with it

I can’t wait to. @Lainger66 are you going to speak to him like a man or just blast him on twitter like all the other keyboard warriors?”

As you can see, Poulter was less-than-pleased with Matsuyama’s care of the greens at Trump Doral’s Blue Monster course. He even went so far as to call Matsuyama an “idiot,” citing a “crater” that Hideki left in the green on hole no. 13.

Poulter is never shy to share his opinion on Twitter, but it appears this time he’s got good reason to complain. Although calling someone an “idiot” might be a bit immature.