Is The Tiger-Phil Era Officially Over? 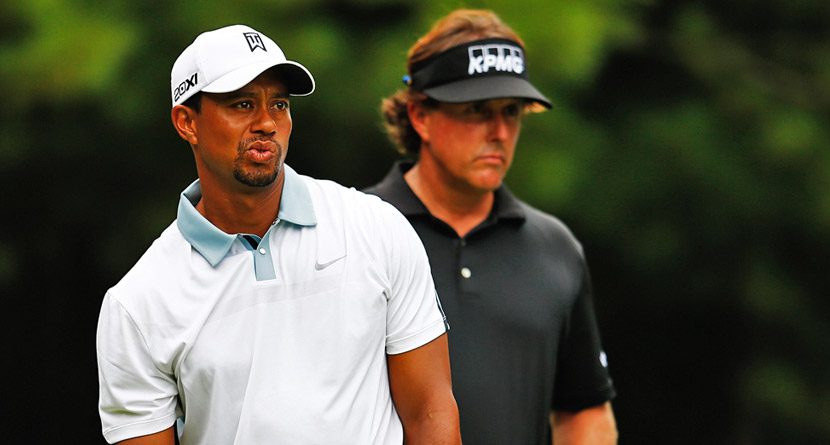 Whilst Rory McIlroy bounced down the 18th fairway at Royal Liverpool, past the Open Championship leaderboard with his name at the top, two names were missing.

Hours earlier, Tiger Woods and Phil Mickelson put the finishing touches on a week to forget. Defending the claret jug, Phil failed to mount any sort of charge, finishing in a tie for 23rd. Tiger on the other hand carded a final-round 75, finishing with the fourth worst score of those who made the cut.

Whilst Tiger was quick to point out this was his first weekend back from injury since the WGC-Cadillac Championship in March, his finish set some unwanted records for the 14-time major champion. Tying for 69th is Woods’ worst ever finish in a major in which he made the cut. He also finished 23 shots behind McIlroy, having never finished more than 19 shots out of the lead at any major in his career.

So are we seeing the end of the Tiger-Phil era?

Numbers suggest we are.

Whilst Phil picked up the claret jug last year, he has won just one of the other past 24 major championships. Tiger on the other hand hasn’t won a major since his victory at Torrey Pines in 2008, a six-year absence during which 19 different players have added a major title to their mantelpiece.

It’s not just winning that has evaded the pair either. For years, Phil and Tiger have been money-making, top-10-finishing machines. Over the course of his career, Tiger has finished in the top 10 in 59% of his PGA Tour starts and a remarkable 54% of the time in major championships.

Since Tiger’s first full season on tour in 1997, he and Phil have combined to finish in the top 10 a stunning 378 times. Yet here we are, with the third major of the year done, and the pair combined, have one top-10.

Phil’s T-2 finish at the European Tour’s Abu Dhabi HSBC Golf Championship is the only top-10 either has managed all year, in 22 total events. It’s not until you look at their top-10 record through the Open Championship over the years, that you realize how amazing this season has been: Related Link: So How Does Golf’s Future Look Now?