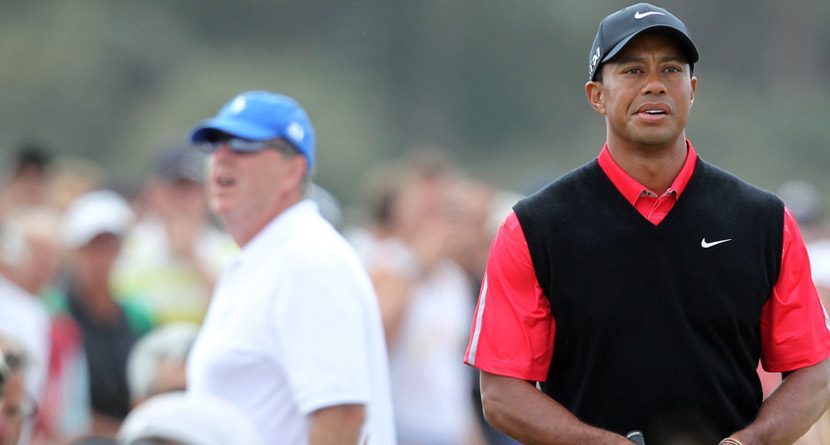 Tiger Woods has officially announced that he will miss the U.S. Open at Pinehurst next month while he rehabs from back surgery.

“Unfortunately, I won’t be there because I’m not yet physically able to play competitive golf,” Woods said in a statement on his site. “I’d like to convey my regrets to the USGA leadership, the volunteers and the fans that I won’t be at Pinehurst.”

Woods, who just relinquished his hold on the No. 1 spot in the Official World Golf Ranking to Adam Scott due to his absence from play, has not played competitively since the WGC-Cadillac Championship at Doral. The rehabilitation process has already caused him to miss his first Masters Tournament since turning pro, and now will keep him from his second U.S. Open since his dramatic win at Torrey Pines in 2008.

Related Link: With Not Much Else To Do, Tiger Woods Masters Video Games

“The U.S. Open is very important to me, and I know it’s going to be a great week,” Woods continued. “Despite missing the first two majors, and several other important tournaments, I remain very optimistic about this year and my future.”

The makes the sixth major championship that Woods has missed due to injuries in his career. Earlier in the day, Jack Nicklaus spoke to the media and discussed Woods’ opportunity to catch his record total of 18 major championships.

“He’s looking forward to getting back into the game,” Nicklaus said during a press conference. “He misses it. I just pass that on.”

Surely, Woods is just as optimistic as Nicklaus is. Hopefully Woods can string together some healthy years and make a good run at that record.

“If he’s healthy, I think Tiger’s got 10-plus years to play top quality-tournament golf,” Nicklaus said. “And certainly, and I’ve said many times, he’s got a little over 40 tournaments to play the major championships, he’s only got to win five to pass my record. As good a player as he is, I don’t think that should be a big deal.”