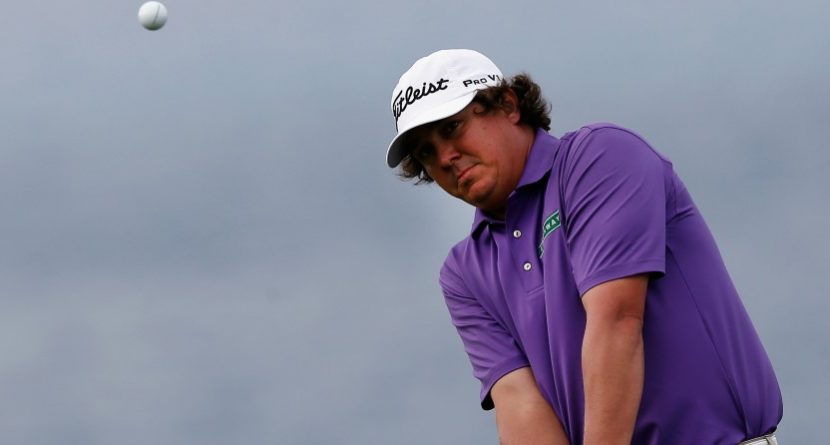 It was all in fun a few weeks ago when Jason Dufner jokingly asked Tiger Woods if he could kindly rearrange his tournament’s schedule to allow Dufner to watch his beloved Auburn Tigers play in the SEC Championship game. Not surprisingly, no special arrangements were made and Dufner “had” to play golf while his Tigers took care of Missouri.

That victory put Auburn in Monday night’s BCS National Championship game. Surely, Dufner wishes he could be there, but gosh darnit, he has to play golf again on the day of a big Auburn game. He’s at the Hyundai Tournament of Champions in Maui, which features a unique Monday finish.

Not to fret, though. It looks as if the Auburn alum can finish his round in time to plop down in front of a TV to catch the national title game festivities. Though he’d have given himself more of a cushion if he had played more poorly.

Entering Monday’s final round, Dufner is 11-under and in a tie for fifth at three shots off the lead held by Webb Simpson, Jordan Spieth, and Dustin Johnson. That puts Dufner in the third-to-last pairing with Gary Woodland. They tee off at 10:40 a.m. local time, and should their round take them four hours (it shouldn’t), they’d walk off the 18th green around 2:40 p.m.

Of utmost importance to Dufner, the Auburn-Florida State tilt kicks off at 3:30 p.m. in Hawaii (8:30 p.m. ET). Although he might want to set a DVR, because his if he gets hot and takes the trophy, the awards ceremony will surely carry past 3:30. And you never know, he might get stalled by sprinklers again.

Nonetheless, Dufner’s Twitter feed is one you’ll want to follow Monday night. He’s an avid Auburn tweeter, but never has his squad been on such a big stage while he’s been so active on social media. On Saturday, he tweeted out an ESPN.com feature on Auburn head coach Gus Malzahn.

Interesting read for all my Auburn followers. http://t.co/tf2yRMpuDN

Dufner was quoted in the story, and he’s actually a worthwhile source to speak about Malzahn, seeing as how the golfer has spent some time with the team.

“He believes successful people are successful for a reason,” Dufner said. “Maybe they have certain characteristics or similar traits, and they’re consistent in the way they do things. I was student at Auburn at one time, just like those players, and I had to do things to become successful, so he believes it gives these kids a chance to see what success looks like.”

“His preparation, the way his mind works, the way he prepares his team to play, it just blew my mind away,” Dufner said. “It was very surprising. There weren’t a lot of note cards or things written down. It just seemed to come from his memory. They were in a bad place at the end of last year, but he gave them the blueprint for how to be successful.”

Dufner spoke to the squad before the season started and again prior to it defeating Texas A&M in October. Dufner even has a street named after him in Auburn.

In case you’re wondering, the Seminoles also have a representative in the field in Hawaii: Jonas Blixt. The Swede was a two-time NCAA All-American at Florida State, but his affinity for his alma mater’s football team pales in comparison to Dufner’s. Then again, few people can compete with Dufner’s fandom.