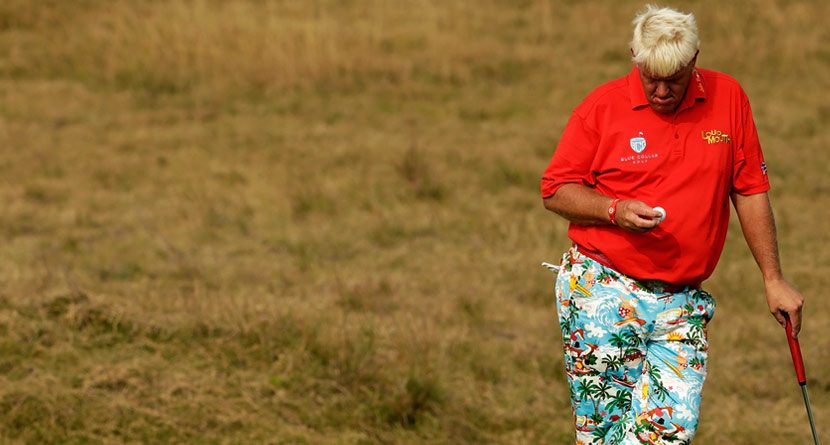 Talk about a major let down.

The official Twitter handle of PGA Tour Media sent out a tweet Monday saying the ever-popular John Daly had won a new car after sinking a hole-in-one during the Humana Challenge Pro-Am in La Quinta, Calif. “J. Daly’s 1st swing with a new @CallawayGolf 9i resulted in an ace at 7 (Nick.) in Mon’s @HumanaChallenge Pro-Am..wins a ’14 Hyundai Equus,” the since-deleted tweet read.

As reported by the San Diego Union-Tribune, when Daly reached the 154-yard par-3 seventh hole on the Nicklaus Private Course at PGA West, a Callaway staffer handed him one of the company’s 9-irons. Daly promptly sank a hole-in-one. And for the ace, he was to receive a 2014 Hyundai Equus.

But hours later, PGA Tour Media sent out another tweet:

@PGA_JohnDaly ace in pro-am @HumanaChallenge today was actually a second practice shot with different club which does not qualify for car.

You’re taking away the man’s car?! After he said this: “Trust me, with three kids, I will put the new Hyundai to good use.”

Poor guy. Everyone’s favorite 47-year-old made his return to the PGA Tour last week at the Sony Open after six months off due to elbow surgery. He finished a respectable T-32 after making some fantastic putts, like this one:

Instead, he “just” has a hole-in-one that doesn’t count for much more than an odd story.

“I didn’t even look at the shot,” Daly said afterward. “I leaned over to get my tee and was telling the Callaway representative that it felt pretty good. He said, ‘Good, because it just went in the hole.'”