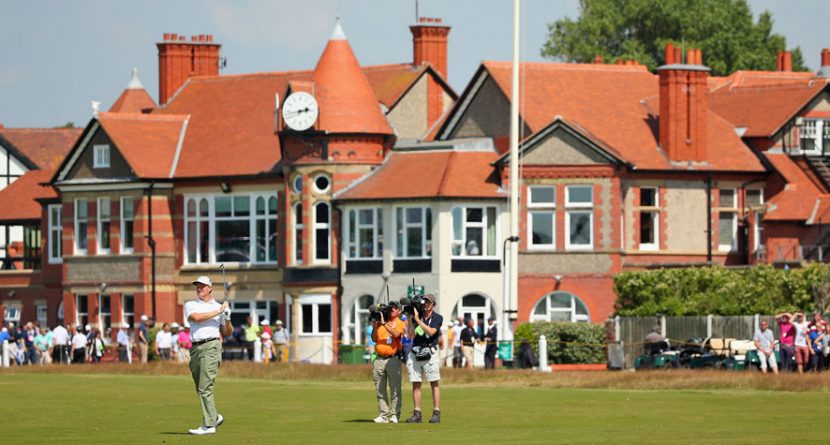 HOYLAKE, England — Derek Clements is on the ground at the Royal Liverpool Golf Club in Hoylake covering all of the action at the 2014 Open Championship live for Back9Network:

Ernie Els, who was the champion just two years ago, began Thursday with a 7 and took 43 shots to reach the turn. His score was the worst in the 156-man field. As a mark of respect to a great former champion, we plan to close the book on Ernie’s first-round suffering on the basis that the South African has suffered more than enough for one day. Oh Ernie!

One of the biggest issues facing golf is its inability to attract enough young players to take up the game. The greatest minds in the sport have addressed the issue, without yet coming close to finding a solution. A look around the media centre at Hoylake might provide a clue, especially when you consider that many of the greatest minds in question are located here. Average age? 30? Nope. 40? Not even close. 50 then? No. It MUST be closer to 60, and there are some respected American journalists who look like they might not even last the week. It is also instructive that while there are plenty of women working in the media centre for the R&A, there are very few female journalists here.

For the Love of the Game

When Japan finally uncovers a truly world-class golfer — and there are signs that Hideki Matsuyama could be the one — you can’t help but feel sorry for what he will face. Every Japanese golfer competing at Hoylake does so under the adoring gaze of the Japanese media. They have sent dozens of photographers and journalists to Liverpool and each player has had his every move recorded. In the media centre, Japanese journalists occupy about one-third of the workplaces.

Padraig Harrington Brought To His Knees

Spotted on the practice ground: Padraig Harrington hitting full drivers while on his knees. This is the same man who was filmed hitting wedge shots over, through and around two trees while blindfolded. Not only that, but he holed one of them. Not content with that, he then struck a full-blooded Happy Gilmore drive — still wearing his blindfold. Don’t be surprised to see him taking a run at a few shots this week.

– Related Link: Must Watch: Padraig Harrington Holes Out While Blindfolded

The Open Joins Us In the 21st Centrury

The Open has gone all hi-tech. Once upon a time (well, up until last year, actually), there were manual scoreboards beside every green, and it was the job of a dedicated team of volunteers to keep spectators updated on each group as it approached the hole. They have been consigned to the dustbin of history — the scoreboards, not the volunteers. In their place are video boards that provide fans with a wealth of information about each player, scores, holes, weather forecasts, as well as regular updates on what is happening around the course. It’s taken a while, but finally the 21st century has arrived here.

Did They Dis Tom Watson?

Before The Open got underway, Tom Watson invited the top 20 players in the U.S. Ryder Cup rankings to join him for a look at the Gleneagles course where the matches will be played in September. Bearing in mind his team’s recent miserable record in the event, you would have thought the response would have been enthusiastic. So how many turned up? Two. Keegan Bradley and Jim Furyk. It is to be hoped that Watson hadn’t reserved too many rooms.

It Ain’t Over Until It’s Over

Masanori Kobayashi of Japan birdied the 13th and 16th, but then dropped a shot at the 17th and took eight to negotiate the closing hole as he stumbled home in 39 strokes for a 78. It should serve as a warning to anybody who finds themselves standing on the final tee on Sunday with a two-shot lead — it is no done deal!

You Know The Open Is In Town When…

You know The Open is in town when, for no apparent reason, you pass a row of shops and see a Volkswagen Beetle parked on the grass with a golf trolley on the roof.

You know The Open is in town when you can’t walk down a road without somebody trying to force a stupid hat, a bag of tees or a discount voucher for a company you have never heard of into your hands.

You know The Open is in town when you keep passing groups of men wearing identical garish tops and unspeakably loud trousers. That also tells you John Daly is in town.

You know The Open is in town when you see a couple preparing to walk the course — he in golf shoes, expensive tailored trousers and Nike golf top; she wearing a skirt that is far too short, a top that is too low cut and shoes with six-inch heels.

You know The Open is in town when the sun comes out and you look around and realize that the area has been taken over by middle-aged men wearing ill-fitting shorts and polo shirts hanging over their waists to hide a pot belly.

And you know The Open is in town when those same men appear late in the day, red as beetroots because they have failed to apply sunscreen.