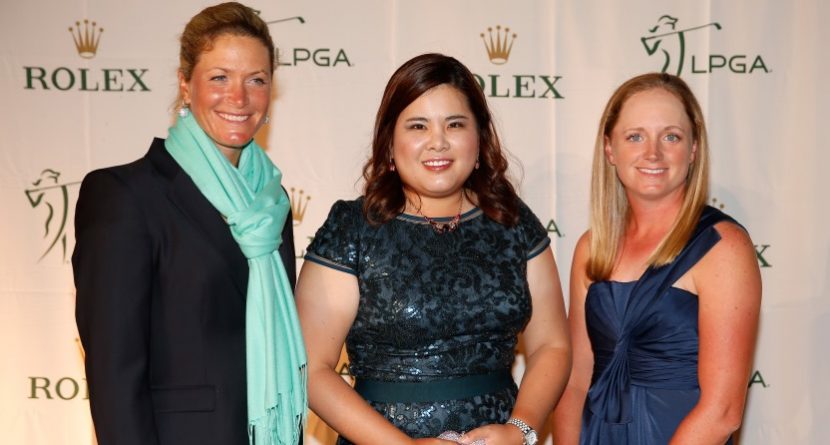 Seeing the interest garnered from players competing for a big season-end prize, the LPGA announced Wednesday that 2014 will feature the tour’s first season-long points competition – the Race to the CME Globe. It will take after the PGA Tour’s FedExCup and European Tour’s Race to Dubai.

The woman who collects the most points throughout the LPGA Tour season will receive a $1 million bonus after the last event, which is now the CME Group Tour Championship, Nov. 20-23. That’s the largest payout in women’s golf.

Excited about the CME Group Race to the Globe, a new season long point system on the @lpga #womensgolf #milliondollarbaby #lpga

The inaugural Race to the CME Globe will commence at the Pure Silk Bahamas LPGA Classic, Jan. 23-26, and the final event at which players can accumulate points is the Lorena Ochoa Invitational, Nov. 13-16. Wins in the majors will be worth 625 points, while every other tournament awards 500 points to the champ.

“CME Group has made quite an impact on the LPGA Tour during our three years together,” LPGA Commissioner Michael Whan said in a release. “The addition of this concept fundamentally connects every event on our Tour and promises big things in 2014 and beyond. The stakes have risen dramatically and the excitement level goes up for our players and each of our tournaments.”

The CME Group Tour Championship will feature a select field, made up of the top 72 players in the points standings following the Lorena Ochoa Invitational, and any LPGA member – not otherwise qualified – or non-member who had an official LPGA win during the year. The points will then be reset for the Tour Championship so that the race will conclude at the event. That means no one will be assured of winning the $1 million bonus entering the final tournament, but those atop the standings will have an advantage.

“I was so honored to win the LPGA money title in 2013 and now I have something even bigger to play for as I look to make it two in a row,” said world No. 1 Inbee Park. “Nothing is guaranteed with this new system so this new race is going to make everyone on our tour work a little bit harder because the payoff is so big.”

Visit NBCNews.com for breaking news, world news, and news about the economy

Off the set, the girls got to meet Kellan Lutz, an actor best known from “The Twilight” series.

@lexi: Both times on the @todayshow got to take a picture with twilight stars. This time it was @kellanlutz :)#seemslikeacoolguy #callmemaybe #goingonsetsoon