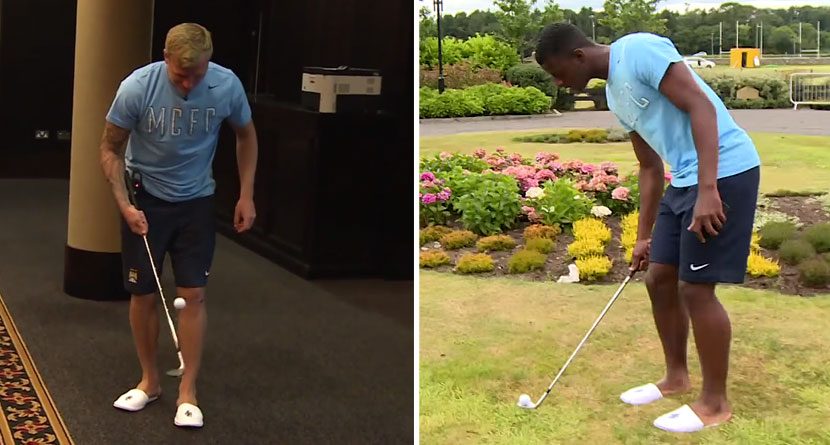 One thing that soccer and golf have in common is juggling. And while it provides very little benefit during competition in either sport, it gives players bragging rights. Since juggling a soccer ball is far too easy for soccer players, a few guys decided to try their hand at juggling a golf ball.

Five players from the Manchester City squad took part in the “Golf Keepy Uppy Challenge,” where each guy was given three attempts to bounce the golf ball off of the club as many times as possible. The results may surprise you (in a good way).

The champion of the competition was midfielder Jack Rodwell, who posted a score of 125 bounces … on his first attempt. He then proceeded to “drop the mic” and pass on his next two attempts:

“Is that it?” Rodwell said. “Do we need more attempts. or will someone beat that?”

The next closest competitor to Rodwell’s 125 was striker John Guidetti with 76 bounces:

The other three players weren’t as successful, failing to break 35 in any of their attempts. Here are Emyr Huws, Karim Rekik, and Greg Leigh’s attempts, from best to worst:

I must say, I was thoroughly impressed with their juggling ability, especially Rodwell’s 125. Could he possibly challenge Graham DeLaet, or dare I say Tiger Woods?

No. Let’s not get too carried away.

Other Hot Links:
– The Fringe: Nicklaus Says ‘If Tiger Wants to Play, I’d Choose Him’
– 9 Great Golf Prank Videos
– You Might Be Surprised At TopGolf’s Impact
– Saints Players Enjoy Golf, Flowery Wallpaper at Greenbrier
– Golf Ball Diver Bitten By a Gator for a Second Time
– Throwback Thursday: Champagne and a Movie