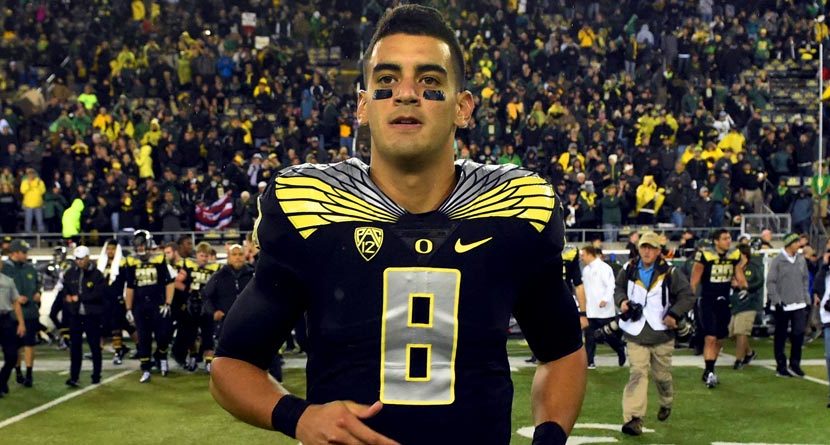 Not only is Heisman winner Marcus Mariota one of the top — if not the best — college football players in the country, but he also had one of the easiest class schedules in all of the land: golf and yoga.

That’s not a knock on his intelligence or work ethic by any means. The guy already graduated and received his degree, so hitting the course and a few yoga mats during the fall semester was simply a way to relax and become more poised on the field. Safe to say, it worked to the tune of 40 touchdown passes and just three interceptions. But that’s not to say he’s as cool as a cucumber on the course like he is on the field. Mariota, like every other golfer, gets frustrated with the game.

Finally … something I have in common with a Heisman Trophy winner.

“Golf is a frustrating sport,” Mariota said. “You can hit a nice shot and then the next one you can hit it in the water, so from that sense it’s frustrating. That game has allowed us to deal with a little frustration and adversity that we can use on the football field.” Who knew golf and football had such a strong connection. It’s not easy to stay calm after duffing a tee shot or slapping one into the hazard, but Mariota seems to be fairly good at keeping his cool.

If he hits a bad shot, rather than hopping in the cart and riding to his ball, he takes the high road and walks to it, thinking about what he did wrong.

As with anything new, golf is a hard sport to learn right off the bat. It takes time and practice, and it sure sounds like Mariota’s golf class helped in that regard.

In an interview with The Oregonian, Ducks quarterback Jeff Lockie said Marcus is “in my phone everyday wanting to play.” Prior to saying that, however, Lockie said Mariota slapped it around his first time out.

Here’s the interview, as discovered by PGA.com.

Knowing Oregon’s history of wearing spectacular and bright uniforms, you’ve probably wondered what Mariota wears while playing golf. Sadly, it’s not a crazy-bright polo, but a duck T-shirt and bucket hat instead.

Lol my step dad got a picture with Marcus Mariota at the golf course pic.twitter.com/MrD0evzHm5

Mariota and the Oregon Ducks are set to take on the Ohio State Buckeyes in the College Football Playoff National Championship on Monday night, where the Heisman Trophy winner will look to add to his incredible legacy.