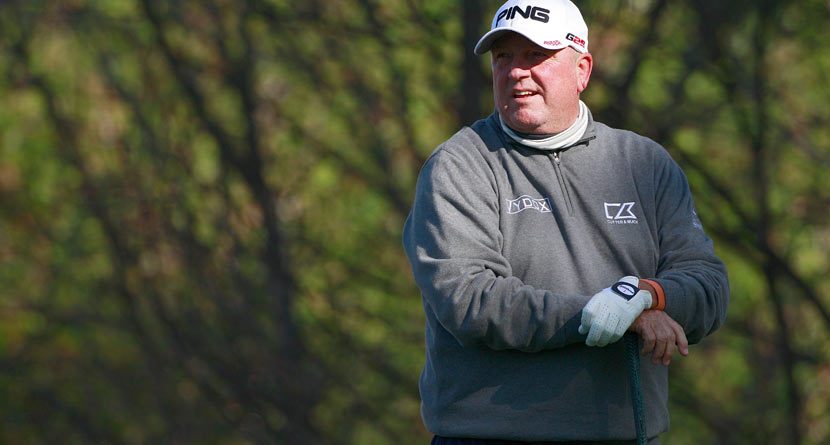 The number of golfers throwing out ceremonial first pitches at major league baseball games is surprisingly high and now you can add one more name to that list. Unfortunately, you can also add Mark Calcavecchia to the list of guys who didn’t quite find the plate.

With the Senior Tour in town for the Constellation SENIOR PLAYERS Championship last week, the Pittsburgh Pirates gave Calcavecchia the chance to toss the first pitch last Thursday to Constellation CEO Joseph Nigro:

Unfortunately, Calc’s weekend didn’t last as long as he’d have liked, withdrawing after seven holes on Sunday due to a back problem which, I assume, is unrelated to the first pitch.

Calcavecchia’s effort wasn’t the best, but it certainly wasn’t the worst either. There was this historically bad one by Howard Stern producer and Keegan Bradley favorite Baba Booey …

… and Carl Lewis’ nightmare in Seattle:

… as well as Carly Rae Jepsen’s disaster in Tampa Bay a few years back:

…and, of course, 50 Cent’s delivery, which might be the worst throw ever made:

Now, you might also be curious to see how Calcavecchia stacks up against other golfers? Actually, not very well. Sorry Calc, but it’s true.

Keegan Bradley threw a strike to Dustin Pedoria in 2011:

…and Cheyenne Woods dropped a slow curve in for a strike in Tampa Bay:

… and who could forget Rory McIlroy’s crow-hop fastball in San Francisco:

At least Calcavecchia can rest well knowing he’s in good company. Just because he makes golf look easy doesn’t mean he can throw a baseball. To be fair, it goes the other way too. Most pitchers can’t play golf as well as Calc can… except for John Smoltz and Greg Maddux. Those two make everything look easy.