Martin Kaymer Came Closer to Losing the Open Than You Think 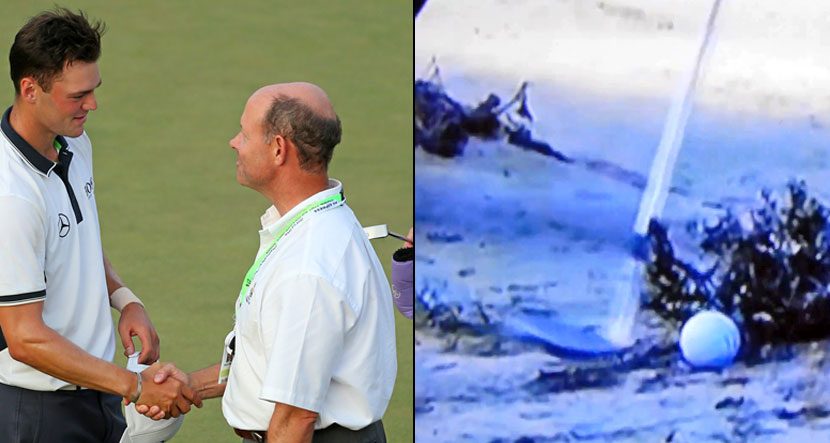 By this time everyone knows that Martin Kaymer put on a clinic at the 2014 U.S. Open Championship at Pinehurst, blowing away the field in a wire-to-wire victory. But did you know that there was a small chance all of it would come crashing down by way of disqualification?

While playing hole No. 10 in his final round, Kaymer found himself in one of the “natural waste areas” at the renovated Pinehurst No. 2 course. He grabbed a wedge, blasted the ball out of the sand and went on with his business.

But then NBC’s super slo-mo cameras picked up on something interesting:

Is that a double-hit? Hard to tell, but to me it looks like the leading edge of Kaymer’s club hits his ball first, followed by the topline of the clubface milliseconds after. OR, debris off the club could have pushed the ball mid-flight. (By the way, the title of that YouTube video is misleading as there is no possible way Kaymer “cheated” on that shot.)

So what’s the point? Indulge me while I put my Inspector Conjecture hat on for a second.

Immediately following his final round, Kaymer was greeted by USGA president Mike Davis while walking off the 18th green. Television cameras and microphones very clearly recorded Davis instructing Kaymer to “take his time” with his final scorecard.

Was this Davis simply reminding Kaymer to take a breath, relax and make sure he takes care of business while in the scorer’s area despite having just won the U.S.-freakin’ Open?

Or did Davis want to allow tournament officials time to review this video to determine if Kaymer should have been penalized for a double-hit? There was some chatter on Twitter suggesting that a video review was taking place, but it was never mentioned on the telecast.

So what could have happened had Kaymer been ruled to have double-hit his golf ball, preceded by signing his card without first adjusting his score for that 10th hole (assuming he wasn’t first made aware of the video review)?