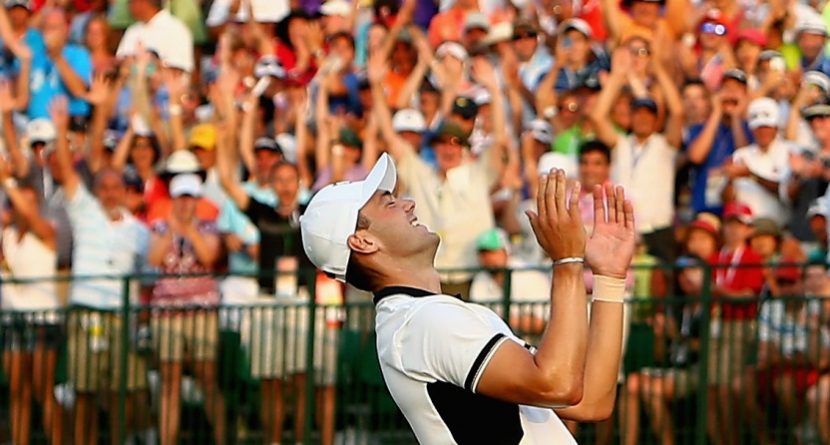 The 29-year-old German posted a 5-under-par 65 in the first round of the U.S. Open at Pinehurst. Had he simply played even par the rest the way, he would’ve taken the title by four strokes.

Yet, for good measure, Kaymer carded another 5-under 65 on Friday. His 130 strokes were the fewest ever through two rounds at a U.S. Open.

“It was probably the best two rounds I’ve ever seen since I’ve been playing,” said Keegan Bradley, who ended up tied for fourth and was in Kaymer’s group on Thursday and Friday.

Kaymer finally played like the rest of the field on Saturday, with a 2-over 72, giving him “just” a five-shot lead entering the final round. There was a glimpse of hope for everyone else.

But the German quickly squashed that optimism Sunday. He was 1-under over the front nine and even over the back nine for a 69. Only five players had a better round. Only Kaymer, Rickie Fowler and Erik Compton finished the tournament under par. Kaymer won with a 9-under 271 while Fowler and Compton tied for second at at 1-under.

And thus, Kaymer collects his second major title, to go with his 2010 PGA Championship. He’s the first German to win the U.S. Open, and joins his golfing idol, Bernhard Langer, with two career majors. They’re the only Germans to have won even one of golf’s biggest events.

“I would say it was probably the toughest day that I played golf today,” Kaymer said after collecting the trophy. “Especially the first nine. Because if you have two or three Americans chasing you, playing in America, it’s never easy being a foreigner. But I said at the ceremony as well, that the fans were very fair. But it was a tough one. If you lead by five shots, it’s not easy. A lot of people think, well you have a little bit of a cushion, but if you approach that day in that way, with that attitude, it can be gone so quickly.”

It goes down as Kaymer’s third career victory in the United States, and all of them have been big. In addition to the two majors, Kaymer captured the Players Championship last month, which is the so-called “fifth major” and boasts the richest purse in golf. And then there’s the 2012 Ryder Cup in Medinah, Ill., where Kaymer’s putt on 18 clinched the title for the Europeans, capping one of the greatest comebacks in the event’s history.

Related Link: That One Time Kaymer Skipped Ball Off Pond Into Hole

Unlike Phil Mickelson, who was aiming for his first U.S. Open title in Pinehurst — which would have given him the career grand slam — Kaymer had not fared all that great previously at the U.S. Open, which prides itself on being the toughest test in golf. In six appearances starting in 2008, Kaymer’s best result was T-8 in 2010.

Later that season is when Kaymer captured his first major, and in February 2011 he ascended to the No. 1 ranking in the world. His reign lasted just eight weeks, and his game underwent a major mechanics change soon thereafter.

Kaymer couldn’t finish better than 12th at a major over the next three seasons. He was one of a few players to make the cut at the four major tournaments in 2013, but none of Kaymer’s finishes were better than 32nd.

Yet on Sunday, Kaymer turned in the most dominating performance of his career. His first major came after winning in a playoff. His second came with no player getting within four strokes of him on the final day.