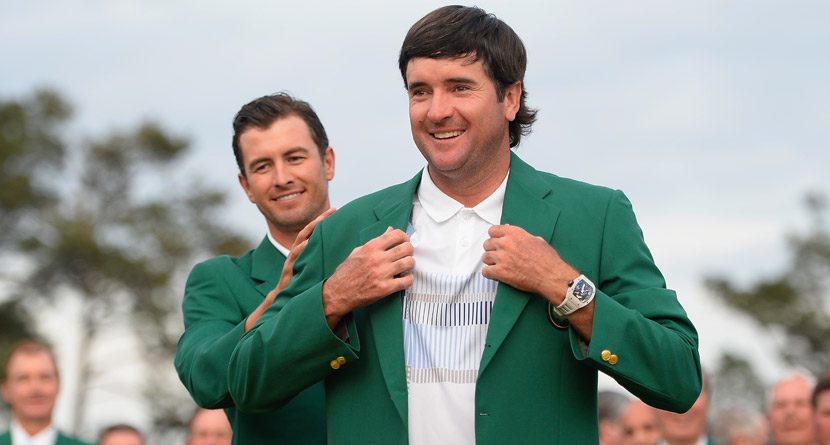 A tradition unlike any other?

With an impressive final-round 69 on Sunday at Augusta National, Bubba Watson is the Masters champion for the second time. It marks his second green jacket in three years, and he’s the sixth left-handed player to win in the last 12 years.

Watson was paired with Jordan Spieth in his final round, and the 20-year old Spieth erupted to a two-shot lead early on the front nine. An amazing hole-out from the bunker on hole No. 4 was included in Spieth’s run, however a number of miscues heading into Augusta’s deadly back-nine holes would ultimately squash any hopes for becoming history’s youngest Masters winner.

The stage was set for Watson to blast his way over Augusta’s pine trees and through the course’s doglegs with an ease that was as scary as it was impressive to watch. Amen Corner – hole Nos. 11-13 at Augusta – was no match for Watson’s pink PING G25 driver, evidenced by a monstrous 366-yard drive on the par-5 13th. It had become Bubba’s World, and we were all living in it.

Five holes later, Watson tapped in for par on the 72nd hole before dropping his putter, placing his hands on his knees and crying tears of joy as the gallery erupted around him. While wiping away tears and pushing up the brim of his PING visor, Watson embraced his family and brought his son, Caleb, with him on an impromptu victory lap, greeting his fans with high-fives around the green.

Yes, Watson has had his fair share of ups and downs in the media for his sometimes strong opinions on matters ranging from religion to other social hot topics. He’s probably lost as many fans as he’s gained over the years because of his outspoken nature, but one thing is for certain: You will always get 100 percent authentic Bubba.

On this Sunday, that authenticity includes a second green jacket. Congratulations, Bubba. We salute you.