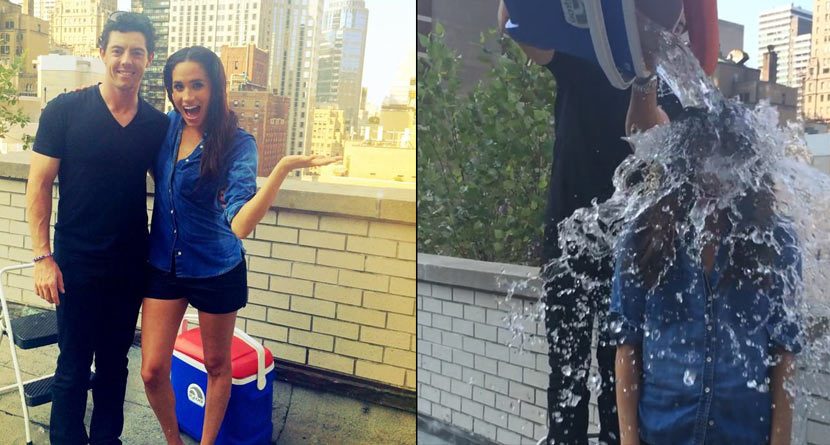 Less than 24 hours after Rory McIlroy called her out, actress Meghan Markle has made good on the challenge — with a little help from McIlroy himself.

In an outfit that he borrowed from either Simon Cowell or Tiger Woods, McIlroy climbed to the top of a stepstool and doused the “Suits” and “Horrible Bosses” actress on a New York City rooftop:

Markle took a moment before being soaked to remind folks to donate to the cause, which has raised nearly a million dollars a day over the last month or so for ALS research. Afterwards, she called out tennis great Serena Williams and posed for a photo with the guy who did the dousing:

Awesome to help @meghanmarkle take on the #ALSIceBucketChallenge today!! Such a good sport! pic.twitter.com/29DhHys4sQ

One of McIlroy’s other call-outs also made good on the challenge — former U.S. President George W. Bush got soaked on Wednesday with a little help from the former First Lady:

The golf world was one of the earliest adopters of the challenge, starting with Rickie Fowler and Keegan Bradley and reaching as far as Woods and McIlroy, Tim Finchem and U.S. Ryder Cup captain Tom Watson and his entire team.

It’s good to see McIlroy is staying busy ahead of this week’s The Barclays in Paramus, N.J., and the beginning of the FedExCup playoffs. McIlroy enters as the No. 1-ranked player and the favorite for this week’s tournament.