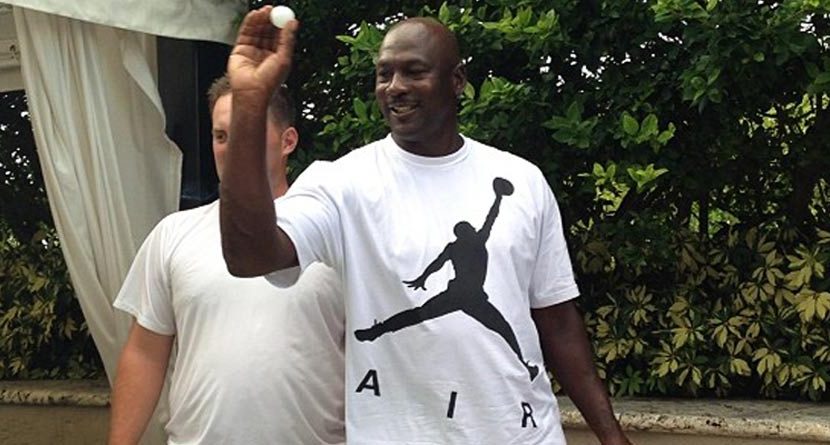 Update: TMZ posted video of Michael Jordan playing beer pong on it’s site and it’s amazing.  Apparently, Jordan still has it from 3 feet. One thing I’ve heard a lot about regarding this video, as well as the pictures, is “the elbow rule.” Guys, give Michael a break. First off, this table is clearly NOT regulation size, as well as being far too close to the retaining wall behind them. Rick Moranis would have a hard time keeping his elbows behind the line.

Some of the coolest photos in sports history are of our heroes stepping out and playing other sports or taking part in other athletic activities. Be it Joe Dimaggio playing stick ball in the streets of 1954 New York or any athlete of celebrity at a golf tournament. I guess it’s always kind of cool to see someone who has so mastered one athletic endeavor try their hand at another.

The elbow rule does not apply to Michael Jordan. pic.twitter.com/KSJgqRdQ2e

of course my mom is playing beer pong with Michael Jordan in Miami why wouldn’t she be? pic.twitter.com/fAd5FAHinf

That’s why when these pictures of Michael Jordan dropping bombs on the beer pong table at the Miami Ritz-Carlton appeared, I wanted more. Most importantly, I wanted to see the other end of the table; I wanted to know if he was dominating.

While these photos are nothing that would make Norman Rockwell regret not being here to immortalize them, they are pretty cool. I like the idea of arguably the greatest athlete of all-time playing a game created at college frat parties, long after he took UNC to the NCAA title. If for a moment, Michael Jordan and I (or you, or your best friend, or that revered beer pong legend from Lammers Hall) are on the same level, playing the same game.

Sure, Jordan plays golf like most of us, and if he was still running the court, he’d probably be in our ‘9 Best NBA Golfers‘ list. Jordan doesn’t have to do anything to be cool; there is no need to impress us. There are libraries of footage for that, but these photos of the “Space Jam” star playing a game reserved for tailgates and dorm rooms makes him human.

Maybe this is a little romanticized, but isn’t that the point? Aren’t pictures worth 1,000 words? In this case it’s more like 351, but hey, he’s playing beer pong, not saving a life or something. Michael Jordan has an asininely ostentatious $29 million mansion , hocks Hanes on planes, spends more time at the casino than Sam Rothstein, rides his motorcycle 100 mph on the highway, and plays beer pong. At least now there is one way we’ve all been or can be “Like Mike.”

Then I turned on Fox Sports 1 and wondered if this week was some sort of “NBA legends revert to college frat guy form” week or something, because there was Kareem Abdul-Jabbar, the NBA’s all-time leading scorer, playing his own game of beer pong. It was actually “Sky Hook Beer Pong” and it was pretty pathetic. But somehow, old basketball players tossing ping pong balls into red solo cups is something I will always watch.

Related Link: An Inside Look at Michael Jordan’s Chicago Home