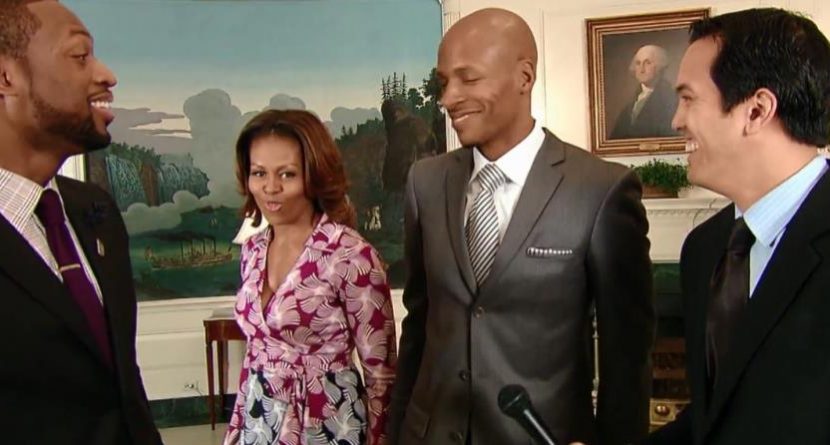 The Miami Heat are a pretty good basketball team. En route to the last two NBA titles and a strong start this season, it has won a lot of games. So naturally, the Heat players are often pretty happy after games.

Happy and hilarious. Or childish. Or whatever. But you have to admit their video bombs are pretty funny.

Well, on their recent visit to the White House to commemorate their 2013 championship, Back9Network board member Ray Allen, teammates Dwyane Wade, LeBron James and Chris Bosh, and coach Erik Spoelstra got the First Lady, Michelle Obama, in on the act. They filmed a spot for “Let’s Move,” an organization founded by Mrs. Obama to encourage children to lead active and healthy lifestyles.

They also got the First Lady in on a Dunk Cam, another recent “internet sensation” where an unsuspecting victim gets dunked on by someone slamming a ball through a mini basket.

If you’re unfamiliar with video bombing, NBA players have it down to an art, especially the oft-featured Heat:

Meanwhile, the Dunk Cam, or Slam Cam, is rumored to have started in school hallways:

But it too made its way to the NBA…

… then to NFL parking lots …

… and finally to NFL locker rooms: