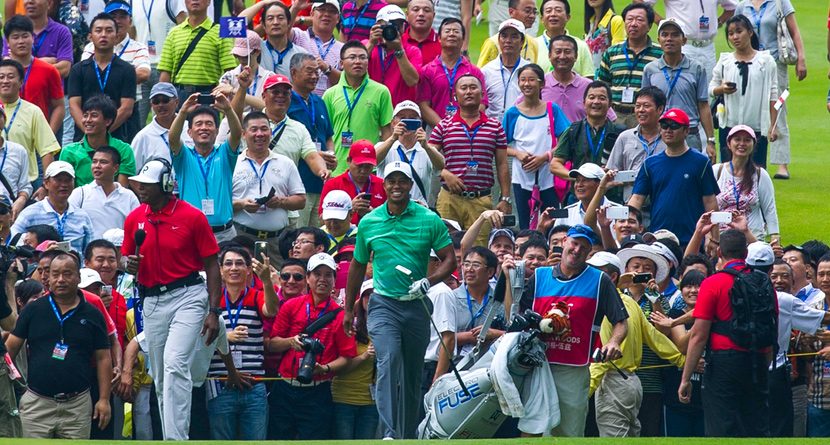 In case you were too busy logging on to Back9Network’s exclusive coverage of The Match at Mission Hills, here are a few newsworthy items you may have missed from the weekend.

1) Tiger and Rory Sure Delivered – Rory McIlroy edged Tiger Woods by a shot in The Match, but the real winners of the day were the legions of fans that came out to the event at Mission Hills. Of course, Ahmad Rashad didn’t look so bad in his new Back9Network hat, either. 2) Tiger is Ready to Move On – Speaking publicly for the first time since Golf Channel analyst Brandel Chamblee all but called him a ‘cheater’, Woods told reporters he believes the ball is now in the TV station’s court and that he is moving on with life.

3) Ryan Moore Wins CIMB – It took an extra playoff hole to do it on Monday morning in Malaysia, but Ryan Moore defeated Gary Woodland to capture the CIMB Classic. Expect big things from Moore in 2014, which might include a green jacket to go with all those ties he wears on the course.

4) Pettersen Wins in Taiwan – Suzann Pettersen successfully defended her title at the LPGA Taiwan Championship on Sunday. Afterwards, she was showered with beer from Michelle Wie, which is the first thing Wie has successfully done on a golf course in years.

6) Celebs Go All Out for Halloween – Yahoo posted a huge gallery of celebrities dressed up for Halloween, including Fergie as an incredible version of Elvira. Paris Hilton even dressed up as Miley Cyrus, because of course she would.

7) Bad Grandpa Kills at Box Office – The Johnny Knoxville-made film, depicting Knoxville as an old man wreaking havoc on America, scored over $32 million in its first weekend. It was enough to come in at No. 1, which should make all of us feel sorry for ourselves.

8) Pearl Jam is Still Awesome – The grunge rock legends are white-hot with their newest album, Lightning Bolt, which debuted earlier this month. Frontman Eddie Vedder wowed Jimmy Fallon viewers with his wit on a recent episode, and the rocker may have even cracked a smile.

9) Hugh Hefner Dresses Up as Robin Thicke – The Playboy Magazine founder and his flavor-of-the-month, Crystal Harris, dressed up as Robin Thicke and Miley Cyrus for Halloween this weekend. The easy joke here would be to ask why Hefner didn’t go as a corpse, but I won’t make that joke because I’m a professional writer.