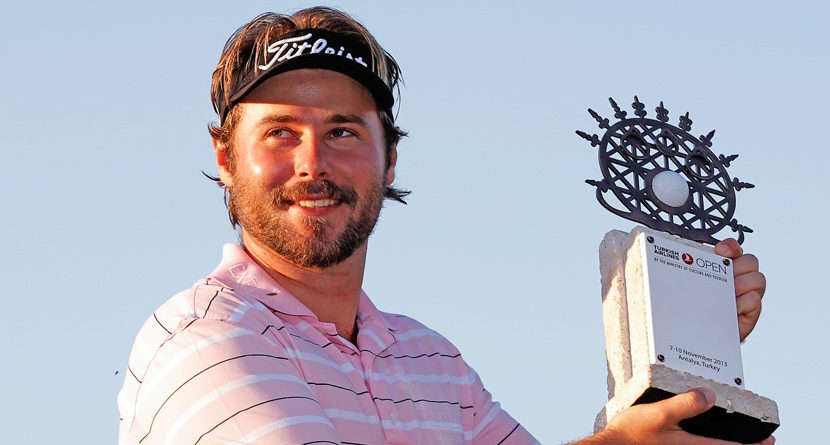 In case you were too busy watching Tony Romo display another example of how not to play quarterback in the NFL, here are a few noteworthy items you may have missed this weekend.

2) Teresa Lu Wins in Japan – Taiwan’s Lu won the LPGA Mizuno Classic on Sunday, marking the first career victory for the 25-year-old. The tournament’s trophy engraver was also overjoyed at the fact that his afternoon task would only include two letters.

3) President Obama Sucks at Golf – You would think that a man who plays as much golf as Obama does would be a little better at the game, right? Apparently not, according to this report from Fox News. MSNBC on the other hand says he’s an amazing golfer.  CNN had 24/7 coverage of paint drying and failed to weigh in on the subject.

4) Chris Kirk Wins in Atlanta – PGA Tour veteran Chris Kirk won for the second time in his career by holding off the field at the McGladrey Classic. The world also got a close look at tournament contender Briny Baird, who was reportedly hunting wallaby’s the entire day.

5) Katy Perry Engaged? – The pop star once again ignited engagement rumors over the weekend after wearing a diamond ring on “that finger”. What’s even funnier is that I just typed the phrase “that finger” in a context that doesn’t include a ball gag and stiletto heels. 7) Barry Sanders Says Players Chose When to Come Back From Concussions – Anything the former Detroit Lion great says should be taken with a grain of salt, but Sanders said players used to have more say in their return timetable following a concussion. This is also a guy who refers to himself in the third person, so there’s that.

8) First Pictogram Unveiled for Summer Games – You know those cute little pictograms you see every Olympic Games depicting each event? Now golf has one, and it was unveiled this weekend. I’m putting my money on the Stickfigures International Team. Call it a hunch. 9) Doolittle Raid Reunion Scheduled – On this Veterans Day, a final reunion of the WWII-era bomber jet pilots is scheduled to take place. Sadly, no talking dogs, cats, horses or squirrels could be reached for comment.

Other Hot Links:
– TV Preview: Back9Network Original Programming
– Inside Voice with Javier Colon: Week 7
– Phil Mickelson: ‘I Want To Be An Olympic Athlete’