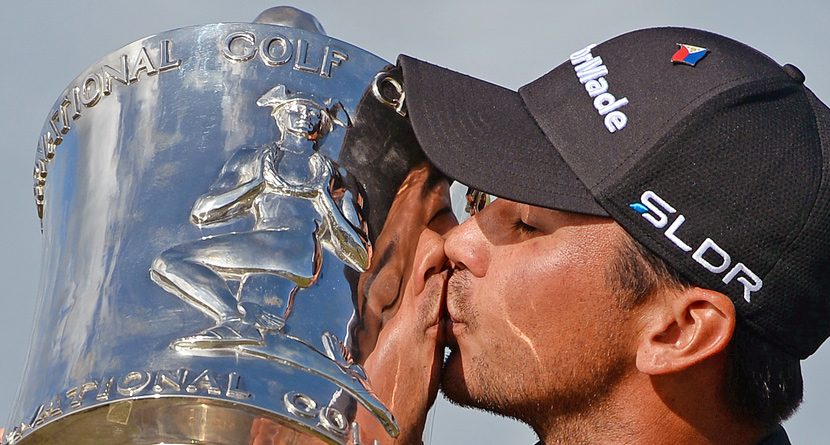 In case you were too busy getting ready for a holiday weekend full of food, football and family you don’t like, here’s what you may have missed over the last few days.

1) Jason Day Wins in Australia – With what might be the golf story of the year (other than Jarrod Lyle’s return from cancer), Jason Day won the Australian World Cup just days after losing eight family members to Typhoon Haiyan. Congrats, sir. 2) Feng Wins LGA Titleholders – Natalie Gulbis was on track to win her second LPGA title, but Shanshan Feng shot a final round 66 to steal her thunder. Feng also picked up a $700,000 check in the process, which should buy a ton of stuffing this Thanksgiving.

3) Peter Uihlein Wins Euro Tour ROY Award – Peter Uihlein is an American golfer. He just became the first American to win the European Tour’s Rookie of the Year Award. Everything is backwards and I’m confused.

4) Rory Settles Lawsuit Against Oakley – Rory McIlroy and former sponsor Oakley finally made nice over the weekend by settling a lawsuit. Isn’t it wonderful when two filthy rich parties settle their differences and swap millions of dollars behind closed doors?

5) Hunger Games Catch Fire at the Box Office – The second installment of the Hunger Games topped the box office this weekend, grossing over $160 million. You just know that Jennifer Lawrence will make a name for herself some day.

6) Manny Pacquiao Won a Boxing Match – In non-golf news, Manny “Sometimes When We Touch” Pacquiao won his boxing match against Brandon Rios on Saturday. Could a historic match-up against Floyd Mayweather Jr. be on deck?

7) Mount Etna Erupted – Italy’s historic volcano, Mount Etna, erupted over the weekend, causing millions of nearby citizens to ask, “Why you gotta break-a yo momma’s heart?”

8) Justin Timberlake Impresses at AMAs – JT worked his magic on stage and as a winner during the American Music Awards, fulfilling his “I Have To Be On TV Once a Month” quota for November.