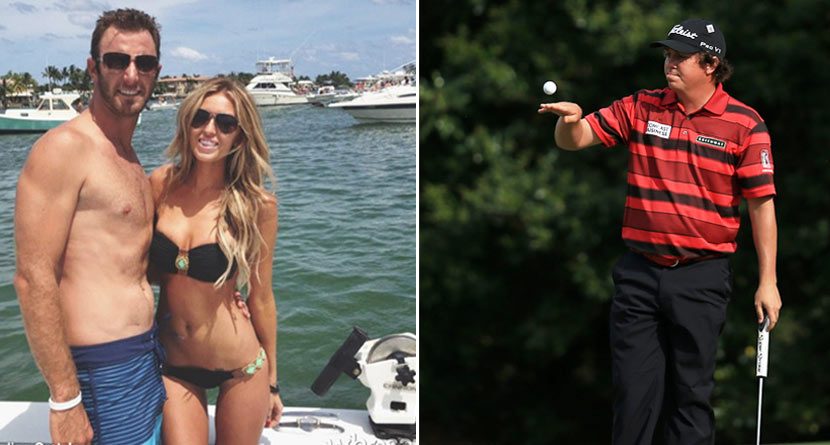 In case you were too busy getting caught up in the NFL Divisional Playoffs, here are some of our favorite Back9Network newsworthy items from the past week.

A-Rod Suspended: Where Should He Play Golf This Season? – Now that New York Yankees third baseman Alex Rodriguez will miss the entire 2014 baseball season, he’ll have more than enough time to hone his golf swing. Here are some courses he should check out.

Celebrity Caddies Not Uncommon on PGA Tour – Celebrity or guest caddies are anything but unusual on the PGA Tour, as many notable names have carried the golf bag of different players over the years. Check out our list of celebrity loopers.

Paulina Gretzky Shows Off A Nice Golf Swing – It’s not all good looks, fellas. Paulina Gretzky showed off her better-than-good golf swing via Instagram this week. Nice action, if I say so myself.

Dan Patrick Dissects Stewart Cink’s Unfortunate Tan Line – Bald-headed major winner Stewart Cink needs to take his hat off more in the sun, as can be seen in this unfortunate photo. Can we get the man a visor or something?

Ian Poulter Celebrates His Birthday & His Kids – Ian Poulter might be a lot of things, but you better be sure to include “awesome father” in that characterization. Check out some shining examples in one of our more popular articles last week.

Jack Nicklaus’ First Pro Paycheck Was Shockingly Small – The Golden Bear may have first been known as the Aluminum Bear, as evidenced by his first incredibly small pro-golf paycheck. How small? It wouldn’t even fill a tank of gas today.

Gearing Up: Cleveland 588 Custom Driver – Cleveland Golf unveiled its new 588 Custom driver this week. You’re going to love how this club looks in your bag.

Lindsey Vonn, Tiger Woods Adopt Dog With Bum Knee – Two star athletes who have a long history of knee injuries adopting a dog with a bum knee of its own? You gotta check this story out.

Click Here for the Best Tweets of the Week

Best Video from the Weekend: