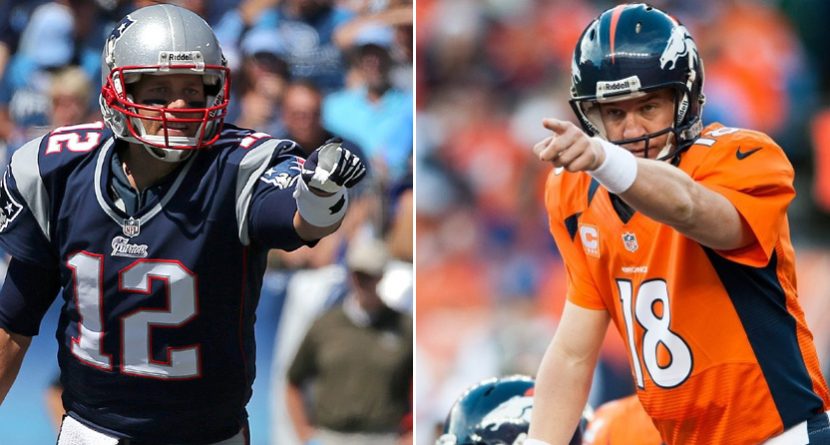 You may have heard: There’s a big football game Sunday night. Some guy by the name of Peyton Manning is playing against a competitor named Tom Brady. You might say they have a rivalry.

It’s not a vicious rivalry, as they’re both quarterbacks, so they’re never on the field at the same time. And they’re pretty good friends away from football, as evidenced by the fact that they teamed up over the summer to battle some businessmen on the golf course.

But they’re rivals because they’re the best in their field, and will one day be remembered as two of the greatest athletes of their generation. It’s somewhat akin to the rivalry played out by Arnold Palmer and Jack Nicklaus.

Knowing as much, the NFL Network called upon the golf legends to discuss the Manning-Brady rivalry. Palmer and Nicklaus were used in the hype machine building up to Sunday night’s battle: Sometimes, greatness isn’t reserved for just one person; the stage is instead shared by two giants. In golf, perhaps this was never more evident than in the 1960s, when Nicklaus and Palmer repeatedly traded blows on the course. From 1962 to 1966, Palmer and Nicklaus were the only two men to capture the Masters and don the green jacket. On the football field from 2007 to 2010, only two men won the NFL MVP award: Manning and Brady.

Whether you’re talking about Jack and Arnie or Manning and Brady, the numbers are astounding and picking the “better” of the two is a virtual impossibility. Using the same ’62-’66 time frame, either Arnie (seven) or Jack (six) accounted for 13 major victories out of 40 contested, or roughly 33 percent. Jack is third in all-time wins on the PGA Tour with 73; Arnie is fifth with 62. Any conversation about golf’s “Mt. Rushmore” is sure to include these two stalwarts — not only for the reasons already mentioned, but for the indelible mark they left and the tremendous growth of the game.

The Manning/Brady rivalry began in 2000 when Brady entered the league. By then, Manning was already a bona-fide star and one of the league’s best. From 2002 to 2013, only five Super Bowls failed to include one of them. Manning and Brady have combined for four Super Bowl titles (Brady has three to Manning’s one) and six MVP awards (Manning four to Brady’s two) since 2002. If you look at the top-five of any passing category all-time, you’ll find one, if not both, of them.

While Jack and Arnie’s greatest moments live on only in top-10 lists, re-airs of classic golf tournaments, and in the hearts and minds of those with a love of golf and its history, Manning and Brady are still creating moments that we’ll never forget.