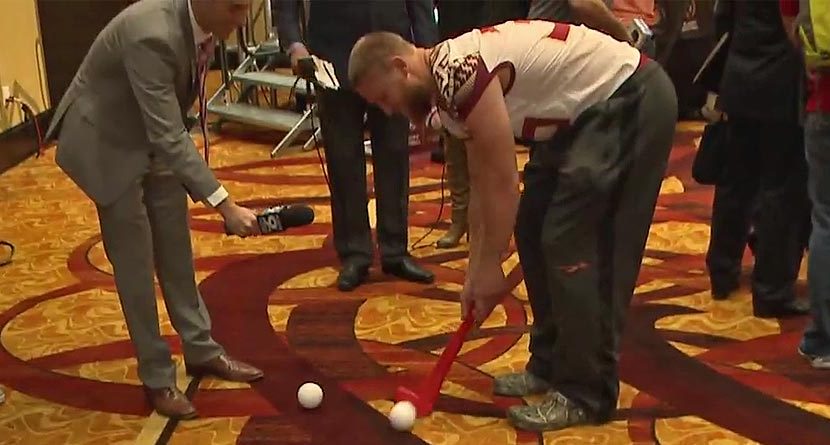 Some may not know that Jack Nicklaus has a strong connection with the Florida State Seminoles football team. How, you ask? His grandson Nick O’Leary is the starting tight end (the best in the country) and is set to take on the Oregon Ducks in the Rose Bowl.

Although football is O’Leary’s first sport, he’s got golf in his blood thanks to his grandfather, too. Unsurprisingly, he’s pretty good with a putter … even a short, plastic one.

Prior to taking on the Ducks, O’Leary and three Seminoles squared off in a putting contest during media day. Take a guess as to who won.

O’Leary and Seminoles quarterback Sean Maguire took home the hardware with the victory, thanks to Nick’s clutch 2-point putt.

Just look at that form. Grandpa would be proud.

Other Hot Links:
– Creepy NBA Fan Sniffs Sweaty Jersey In Bizarre Video
– Too Much Snow? Have No Fear, ‘Snolf’ Is Here
– Jim Furyk’s Maui Mansion Hits Market At $5.995 Million
– The Clubhouse: Pro Football Hall Of Famer Eric Dickerson
– The Clubhouse’s 20 for 2015: No. 3 Phil Mickelson
– Where Would You Go If You Could Travel The World In 4 Hours?
– One Direction Star Receives Lifetime Membership To Irish Golf Club
– Corvette Stingray Dash Cam Catches Valet Misbehaving
– Tweek In Review: The Week’s Best Tweets
– The Fringe: Gary Player Predicts Rory To Win Masters & The Boldest Predictions
– Is This Ridiculous Backstop-Putt Better Than The Original?
– The Clubhouse’s 20 for 2015: No. 4 Dustin Johnson