Greg Norman on Tiger: ‘I Probably Would Have Beat Him’ 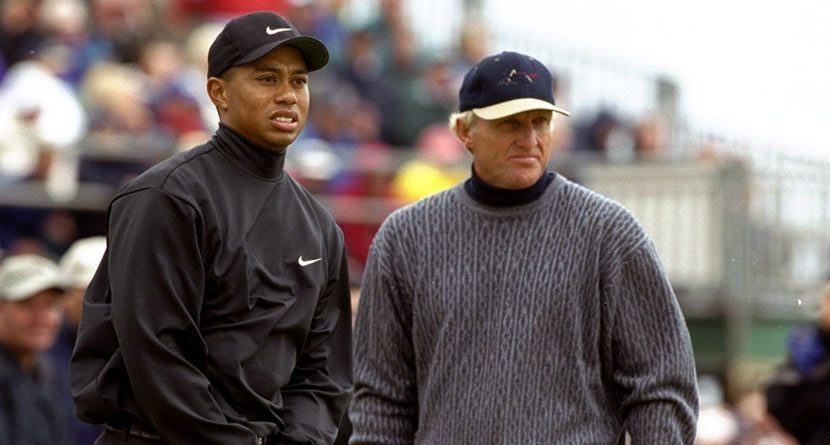 Which is the more fearsome predator: the shark or the tiger? At least in a golf sense, Greg Norman thinks it might just be the Shark.

“I think I’d do pretty well against Snead, Hogan, Tiger and Phil — whoever,” Norman said recently in an interview with Golf Magazine. “Tiger’s a tough guy, but I was a tough guy on the course, too. I probably would have beat him.”

“I never feared anything or anyone on the course, and I wasn’t afraid to fail,” Norman continued. He credited that as the reason he felt he could beat anybody in his prime.

Norman and Tiger may have teed it up together in the some tournaments but their reigns of dominance passed like ships in the night. Tiger turned pro in 1996 and won the Masters the following year; Greg Norman finished second in 1996 and third in 1999 at the Masters. And aside from a memorable run at the 2008 Open Championship, where he eventually finished third, Norman’s career faded about the same time as Tiger’s began. Norman has been critical of Woods in the past, famously predicting in 2011 that Tiger would never win another major. So far, that prediction has held true but Woods enters 2014 on the heals of a five-win season and has previously won on three of the four 2014 major venues, Pinehurst being the only one where he has yet to claim victory. It seems as though Woods is on a track to get back into the major win column despite the opinion of the Shark.

“Tiger, when he dominated, had a single-shot approach. It was only about the golf. Everything else was taken care of,” Norman in ’11. “But now there are so many other distractions, and people are looking for things that are wrong with Tiger now, so he’s got to deal with that on a day-to-day basis, like every other mortal has to do, right?”

Since the only place left where Norman and Woods could duke it out in their primes is in video games, we’ll never really know who’d beat whom head-to-head. But we can take a guess based on their careers. Woods has spent nearly double the amount of time as world No. 1 as Norman did, and despite going 0-for-8 since Norman made his prediction, Woods’ 14 major titles is still more than Norman’s two. A lot more.