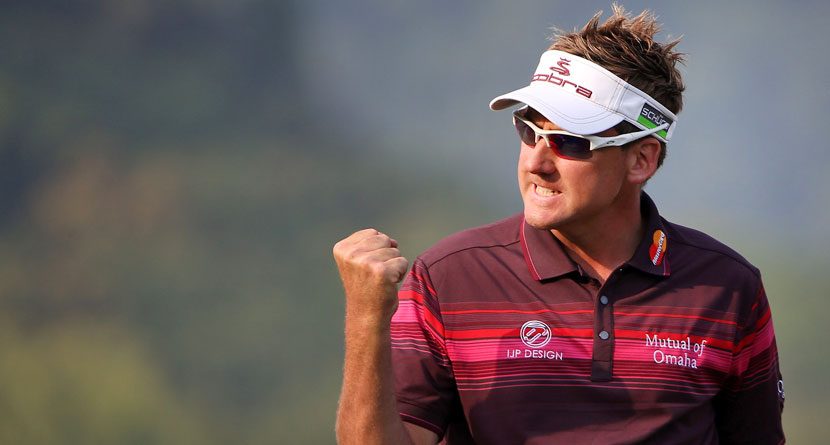 He’s the European Team player all Americans love to hate.

For more than a decade Ian Poulter, 38, has been a European Ryder Cup team staple, wreaking havoc on the minds and hearts of his red, white and blue opponents. He has amassed a legendary 12-3 career record (.800 winning percentage) at the biennial event, making him the most successful Ryder Cupper in history. In 2012, Poulter all but single-handedly catapulted his team to victory from the jaws of what seemed like a certain defeat at the Meltdown at Medinah.

He is to be despised. He is to be heckled. But most importantly, he is to be feared and respected.

How important is Poulter to the European Ryder Cup team? He’s had one of the worst seasons in his professional career in 2014, but Euro Team captain Paul McGinley still picked him. There is little doubt that doing anything otherwise would have caused an international incident. I wouldn’t be surprised to learn that McGinley received a phone call last night from the Queen Mother herself.

How dangerous is Poulter during the Ryder Cup? He was once targeted by NBA legend Michael Jordan – a frequent assistant captain/sideline creeper for the U.S. – as the main player to intimidate in the middle of the competition. That’s insane. You never see someone actively trying to throw a golfer off his game. And Jordan wasn’t even playing!

Furthermore, Michael Jordan is competition-crazy. (I’m from Chicago so I can say that. Permission is granted once every tax season.) He once punched former teammate Steve Kerr in the face during practice. Being the subject of Jordan’s ire and attention is akin to sitting at a coffeehouse and noticing a red dot appearing on your chest. Poulter brushed him off like a gnat.

What’s even scarier this time around, however, is the team that will surround Poulter when the show starts this month in Scotland. Four of the top five players in the Official World Golf Rankings are on the team — Rory McIlroy (1), Henrik Stenson (3), Sergio Garcia (4) and Justin Rose (5). That’s right; Ian Poulter is the greatest Ryder Cup player to ever live, and he’s not even the biggest threat on the team.

Can you imagine what will happen when this motivational scream explodes across the course on Ryder Cup Sunday? The earth’s rotation will change direction: North America will have nightmares. Our Canadian neighbors will be singing us lullabies for months, just so they can finally get some shut-eye (eh). And unless U.S. team captain Tom Watson is picking Davy Crockett, Jack Bauer and Batman later this afternoon, the European Ryder Cup team will be holding on to the Cup for two more years.