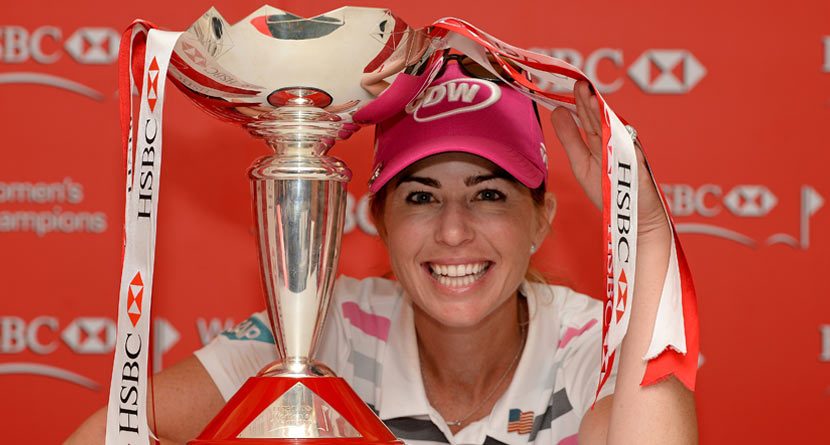 Few things in sports match the unbridled joy of victory. It’s even better when you haven’t tasted it in a while. For Paula Creamer, the ledger stood at 0-for-79 since her victory at the 2010 U.S. Women’s Open at Oakmont.  That changed Sunday when she buried her eagle try on the second playoff hole to win the HSBC Women’s Champions in Thailand.

It’s Creamer’s 10th career win on tour and her first of the year. The win also vaults Creamer to first place in the Race to CME Globe standings. After the tournament, Creamer said it was, “one of [her] favorite wins.”

Creamer shot a final round 69 to force a playoff with Azahara Munoz who shot 70. After the win, Creamer reflected on missed opportunities in the past at this tournament which motivated her this time around.

“It’s funny, I remember sitting on the 18th green last year when Stacy [Lewis] won and I was in the mix there and I didn’t play that great on the back nine,” Creamer said in an interview on LPGA.com. “I remember sitting there just watching her hold the trophy, and there’s obviously times in everybody’s life where things happen and this and that, and just watching her there and knowing that I could have played better on the back nine, just kind of really motivated me and made me just want it even more.” The win is just another notch in the positive trend that Creamer’s life has been on. She recently got engaged to her boyfriend, Derek Heath, and has been playing really well as of late suggesting that her return to the winner circle was just a matter of time.

“There’s a lot of up-and-downs but Derek just makes me so happy and makes me want to be better out here. He just motivates me. Not that I don’t need that, but it’s nice when it comes from other people and your team around you. It all comes down to believing in yourself; if you don’t, then nobody else will.”