Gretzky, Hardin Among ‘Most Desirable Women’ 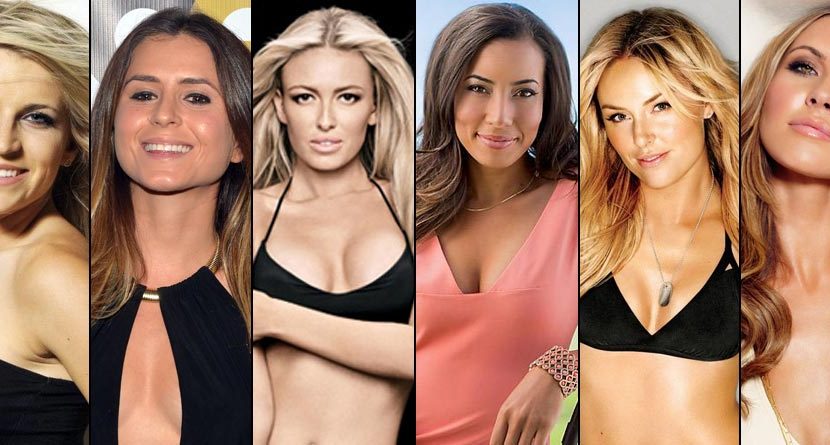 Askmen.com has finally revealed its annual list of the 99 Most Desirable Women, and to no one’s surprise at Back9Network World Headquarters, Anastasia Ashley, Meghan Hardin and Paulina Gretzky are all on the list.

Gretzky, who checked in at No. 59 on this year’s list, is famous for a couple of reasons. But the likely reason she made this list is due to her Instagram prowess. She’s engaged to PGA Tour star Dustin Johnson and is the daughter of NHL Hall of Famer Wayne Gretzky, but her presence on social media and her propensity for spending time at the beach and sunning herself has gotten seemingly everyone’s attention. In case you missed it, she’s also got a heck of a golf swing, courtesy of her beau.

Meghan Hardin (Photo Gallery) is known for her appearances on the reality show “Big Break” and for her 2014 Wilson Staff calendar. Most importantly, the blonde bombshell is a professional golfer. Yes, I agree — it’s not fair for someone to be that attractive AND so good at golf. Hardin checked in at No. 83 this year but if she’s “the future of golf,” as stated on her website, then she’ll be shooting up the charts next year. She’s already hard to ignore; imagine what’ll happen when she starts winning. Anastasia Ashley is a newcomer to the game of golf but like Gretzky, that isn’t the reason she made this list. Ashley is a professional surfer and may as well be a professional Instagrammer, too. She’s been turning heads on the waves since she was 7, and has won more than 200 titles before turning pro at age 16. But it’s on Instagram that she has garnered the most acclaim. Lately, the social media maven has turned her attention to the game of golf and we couldn’t be more excited. While these three were more than deserving, there were some egregious oversights that we plan to correct right now.

Lindsey Vonn has been everywhere except Sochi this Olympic season and it’s hard to imagine her not making a “most desirable” list right now. Vonn can be seen from newsstands to the “Today Show” these days. She’s nearly inescapable… in a good way. The newest member of the Back9 team, Audrina Patridge, also deserves a spot on the list. What could be more desirable than a reality TV star who has carved out a successful career based on talent? On top of being drop-dead gorgeous, Audrina can be found after Saturday Night Live on NBC hosting “First Look” and soon on golf.swingbyswing.com. Next, how about a little love for Cheyenne Woods? She’s already been named one of the most beautiful women in golf and now she’s a winner on the Ladies European Tour. She’s also Tiger Woods’ niece. What else is there to desire than a beautiful girl who can feed you your lunch on the golf course?

Another glaring omission from the list is Back9’s Ali Waite. What’s not to love about Ali? She’s a successful model who loves to travel and knows her way around sports, especially golf. Along with those credentials, the Washington native has been in front of a camera for over 10 years hosting a variety of television shows and events.  Waite is also a brand ambassador for Macanudo Cigars. Seriously, who wouldn’t want to hang out with this girl? Finally, Back9Network’s own Emmy-nominated Jenn Bosworth should be on everyone’s radar. She currently hosts a weekly recap of the hit NBC series ‘The Voice’ with season 1 winner and Back9Network Artist-in-Residence Javier Colon and co-hosts “Tweek In Review,” a review some of our favorite tweets from the week that was in golf. In my opinion, the absences of Lindsey, Audrina, Cheyenne, Jenn (and Anna Kendricks, as well,) are glaring omissions in an otherwise very good list.