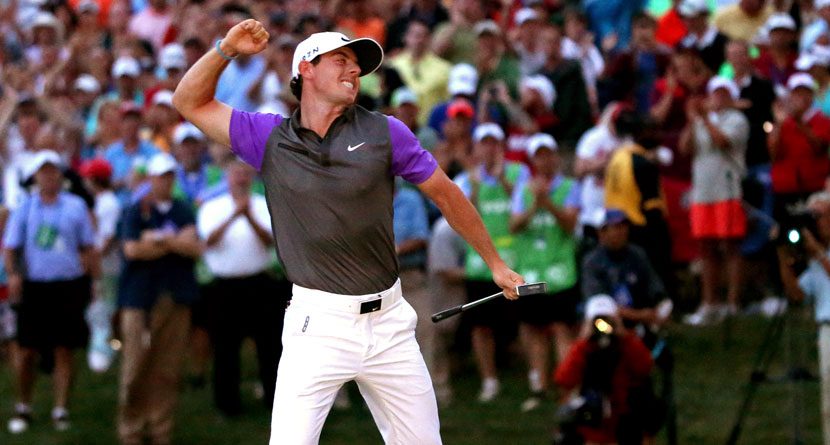 The final round of the PGA Championship gave fans some of the best golf they may ever see. Big names littered the top of the leaderboard as Rory McIlroy, Phil Mickelson and Rickie Fowler came down the stretch, going shot-for-shot on the back nine.

You really couldn’t ask for a better day of golf viewing. And it showed.

According to CBS, ratings for the final round on Sunday were up 36% from last year, earning a household rating of 6.0. The ratings were also the highest for any PGA Championship since 2009 when Y.E. Yang came from behind to beat Tiger Woods at Hazeltine.

The peak came between 8:00 and 8:30 p.m. with a 9.2 rating, when the height of the action was taking place during the finishing holes. Throw in the element of darkness and everyone scrambling to finish the round, and you have yourself golf drama like no other.

Unsurprisingly, the 6.0 rating was up 54% from 2012’s 3.9, when McIlroy won by eight strokes. No one likes a runaway victory, and the evidence proves it.

There was a major difference between 2014 and 2012, though: Tiger Woods’ name on the leaderboard.

Ratings often fluctuate and hinge on Woods’ presence each week in large part due to the crowds his name draws. He’s the biggest name in golf. However, this time was different. Ratings were higher than the past five years, even without Woods at the top.

Is this a sign of things to come? Maybe. But there’s still no debate that Woods’ name brings fans. And ratings likely would have been even higher had he been in contention.

Regardless, between McIlroy and Fowler, golf seems to be in good hands for many years to come. Their names are the ones to watch, and clearly fans are doing just that.