Phil Mickelson: ‘I’ll Probably End Up Winning My First Open’ If It Rains 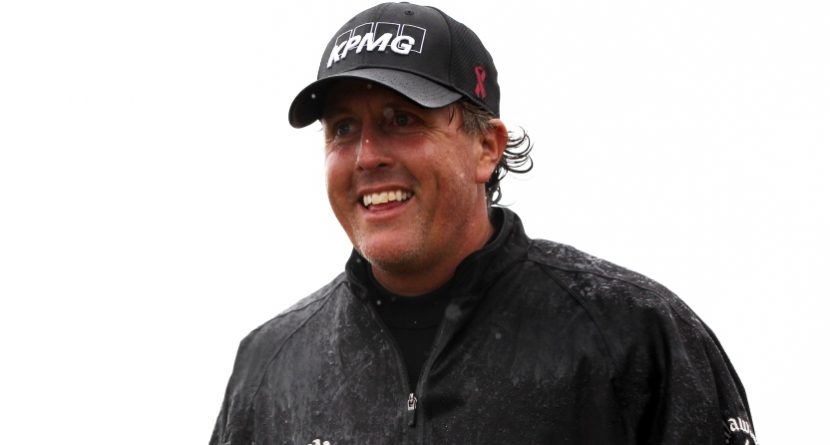 Mickelson is sure that if it rains this week at Pinehurst, his chances of claiming his first U.S. Open, and thus the career grand slam, are pretty good.

“If it rains, I have really good action there. I’ll probably end up winning my first Open,” Mickelson said Tuesday in a video posted by KPMG Golf.  “And if it doesn’t, I might have to wait until Chambers Bay next year.”

What are the chances of rain this week in Pinehurst? Pretty good. As of Tuesday evening, the 10-day Weather Channel forecast shows scattered or isolated thunderstorms each day of the tournament, and even afternoon storms on Wednesday, possibly softening up the No. 2 course for the first golfers Thursday morning. There is a 60 percent chance of rain on Thursday, 40 percent on Friday, 30 percent on Saturday and 40 percent on Sunday.

So take that for what it’s worth. Mickelson is obviously hoping for rain but if it doesn’t come this year, he alluded to waiting until next year at Chambers Bay. That’s a links-style course that has never hosted a U.S. Open before. It’s located on Puget Sound outside of Tacoma, Wash.

That’s in the Pacific Northwest, where, you may have heard, it rains a lot.