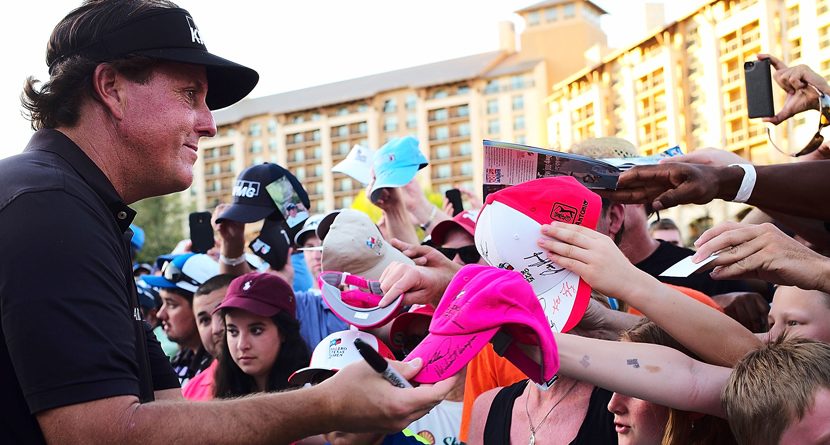 The start of the Masters wouldn’t be complete without a little FIGJAM moment to tee things off.

Phil Mickelson engaged in a little friendly bet with a fan during his practice round on Tuesday, and he ended up forking over $1 while practicing with Jason Dufner, Dustin Johnson and Rickie Fowler.

The challenge started when Mickelson put a ball just off the green at the par-3 sixth hole. A fan watching nearby just outside the ropes made a bet with Mickelson that he could not get up and down. Lefty has been considered by many to be one of the better short-game players in the sport, but unfortunately, the fan got the better of the three-time Masters winner.

At first, Mickelson told the fan that he didn’t have a dollar because he simply doesn’t carry around smaller bills. But Lefty made good on his end of the bargain and threw in a golf ball for an extra incentive.

@GolfCentral and he paid the debt, even if he had to borrow the $1 from @JasonDufner‘s caddy pic.twitter.com/uAFe8Ml2XG

@GolfCentral @CarolCross1 @carolcross1 he first said I don’t have a $1, I’ll give you a golf ball. He ended up giving both.

“He was mouthing off — ‘hard shot, get this up-and-down, no chance’ — blah, blah, blah,” Mickelson said afterwards. “And it wasn’t that hard a shot and I should have gotten it up and down. And I did hit a good shot. I had a seven-footer straight up hill and I had to pay him.” Hopefully, Lefty’s favorite week of the season won’t cost him a few bucks or more when the tournament gets underway for real on Thursday. At that point, all bets are off.