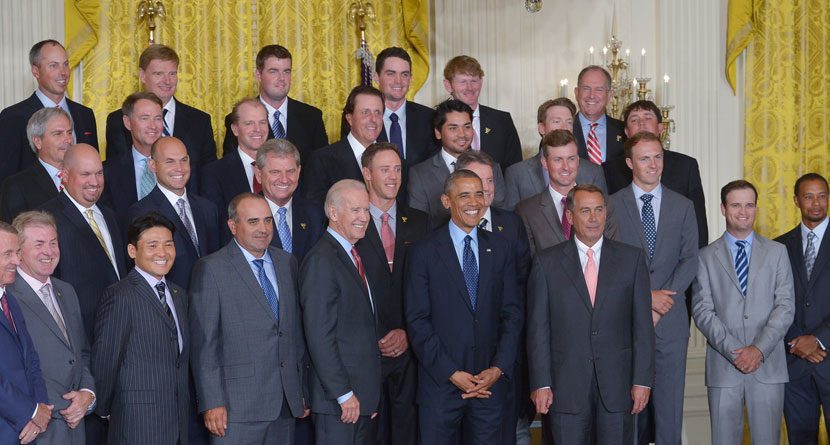 Prior to the Quicken Loans National beginning on Thursday, the 2013 Presidents Cup teams paid President Barack Obama a visit at the White House on Tuesday night. Tiger Woods, who’s returning to competitive golf this week, was one of the members from the American squad visiting the White House, along with his girlfriend Lindsey Vonn.

All 12 members of the U.S. team were in attendance, including Jordan Spieth, Keegan Bradley, Brandt Snedeker, Phil Mickelson, and Jason Dufner, among others. As for the International team, Angel Cabrera, Jason Day, and Ernie Els were a few of the players representing the team from a year ago.

As an avid golfer, President Obama is well aware of his impact on the game. At least, on the Presidents Cup, that is.

He also hopes to improve his game out of the bunker, thanks to a tip from a fellow lefty.

“And I want to thank Phil Mickelson for giving me an excellent tip on my sand game, because I’m pretty sure I can shave at least two or three strokes if I can just get out of the darn sand,” Obama said. Not only was President Obama not used to seeing the players in suits, but he was told by a young golfer that it was the first suit he ever purchased.

“I’m not used to seeing these guys in suits,” Obama said. “Spieth told me that this is the first suit he’s ever bought.”

As for the rest of the ceremony, Snedeker had, well, an interesting night. It included blood and a “certain young tour pro” breaking the law while at the White House.

Hey @BrandtSnedeker not many people have been 2 feet behind Obama giving a speech and had blood dripping down their face. #arresthim

Recap.. Went to WH.. Meet president.. Randomly had blood dripping down my chin during press conference.. @Keegan_Bradley did nothing! #sweet

Also might have photo proof of a certain young tour pro breaking a law at the White House.. It’s called bribery and I love it!!

Here are some of the best photos from the teams’ visit (and yes, there were selfies):

@JordanSpieth and Annie are ready to meet President @BarackObama pic.twitter.com/hTbbuHLTUI

At the @WhiteHouse with @TigerWoods and the @PresidentsCup members to meet President @BarackObama pic.twitter.com/uxEza55YYA

First visit to the @WhiteHouse with @BrandtSnedeker#proudtobeanamerican#RBCSnedekerpic.twitter.com/HaOogTb91R