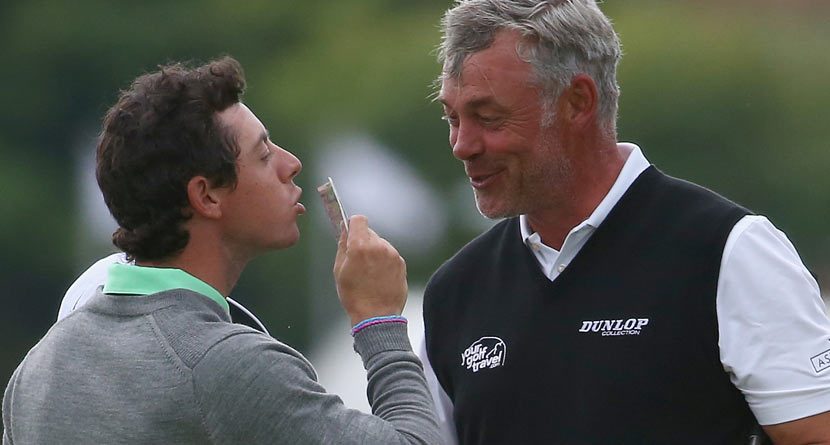 Sports and betting have a long, rich history together. Sometimes, however, the lines get blurred when competitors start placing bets on the event in which they’re playing. Just ask Tim Donaghy, the 1919 Chicago Black Sox, or Pete Rose. For some, it’s a not-so-rich history.

In an effort to keep that from happening to any of the 156 participants in this year’s Open Championship, the R&A has had players sign waivers saying that they wouldn’t bet on the week’s action at any of the established betting houses around the course.

“It’s really no different than what we already have on the European Tour and PGA Tour, so it doesn’t change anything,” Graeme McDowell told ESPN. “Honestly I love to gamble … just not on golf!”

With golf making its return to the Olympics in a little less than two year’s time, R&A CEO Peter Dawson doesn’t believe there’s any illegal activity going on in golf, but said they must remain “vigilant” in keeping a betting scandal out of the game.

“I can say that this whole business of keeping sport clean in terms of betting is very high on the IOC’s agenda at the moment,” Dawson said. “[It’s] something that we’re following very closely because it’s just a killer to sport to think that any outcomes might have been predetermined.”

This doesn’t affect any of the side-betting done by most players during practice rounds, however. Phil Mickelson is legendary for his Monday-Wednesday betting and Rory McIlroy has already been seen this week taking money from 2011 Open champion Darren Clarke. Odds are, these games will still continue.

Yet, while the players have been asked to sign waivers, the caddies have not.

“I can still go make the bet,” one anonymous caddie told ESPN.

Some sources have said that, despite the waivers, a number of players are still betting on The Open.

“There’s probably … at least 30 guys in violation [of the no-bet waiver] already,” said a player representative who wished to remain unnamed. “That number will be bigger by Thursday.”

The R&A’s executive director of championships, Johnnie-Cole Hamilton, said the policy on gambling has been in place since the 2011 Open Championship, despite players reporting this as the first time they’ve been asked to sign any kind of waiver.