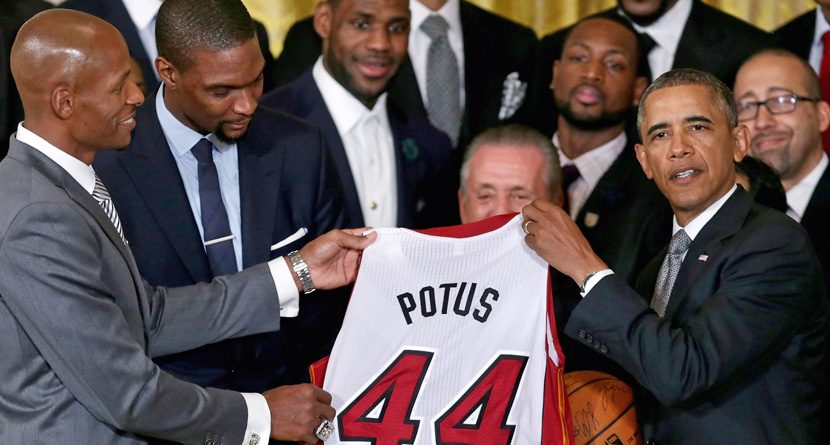 With the Miami Heat in town to play the Washington Wizards on Wednesday night, the defending NBA champions swung over to the White House on Tuesday for a ceremony with President Barack Obama. The team presented him with a basketball trophy signed by each player, and gave him a white Heat No. 44 jersey that read “POTUS” on the back. The president of the United States’ nickname looked just as good as the players’ nickname jerseys.

Visiting the president after a championship is a tradition for American sports teams, and sort of for the Heat too. The squad was honored for the second straight year and is on track for a third consecutive title. Obama acknowledged that the Heat wouldn’t be there with him if it weren’t for Back9Network ambassador Ray Allen, who hit a clutch 3-pointer in Game 6 of the NBA Finals to keep the Heat alive.

“And then they brought out the ropes,” Obama said, referring to arena personnel who prepared for a Spurs’ championship presentation. “And then Ray Allen saw them bring out the ropes. And with five seconds left, Chris Bosh gets an incredible offensive rebound, passes it out to Ray; Ray is backing up, he’s got to jump forward; hits one of the most iconic shots of all time. And then he added a few choice words about the ropes, which we cannot repeat here.”

“But, Ray, I do want you to know that when you say those things on the court, like, people can read your lips, right. You do understand that?” Obama joked.

There were only suitable words said as Allen handed the POTUS his jersey. At 27-10 on the season, Allen and the Heat hope to be right back in the White House again next year.