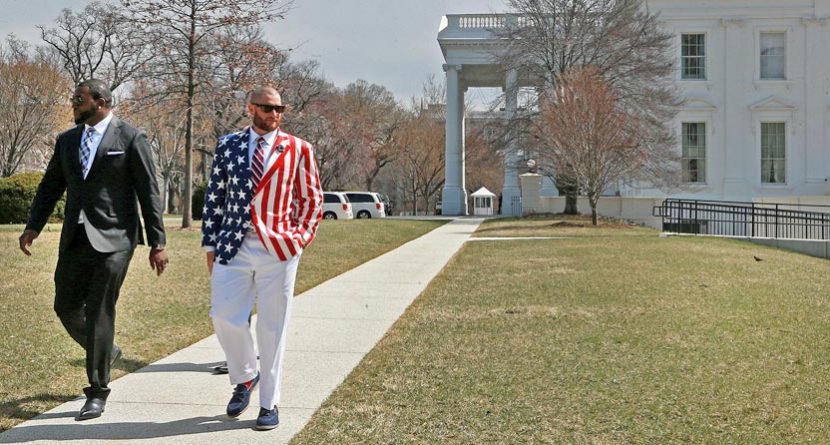 The Boston Red Sox visited the White House on Tuesday to celebrate their 2013 World Series victory with President Barack Obama. Players, including World Series MVP David Ortiz, took advantage of the opportunity by snapping photos and “selfies” with the president.

What an honor! Thanks for the #selfie, @BarackObama pic.twitter.com/y5Ww74sEID

Obama not only received a personalized Red Sox championship jersey, he was presented with a very patriotic gift:

Hey @BarackObama, we have a gift for you for our trip on Tuesday to @WhiteHouse. Stars & Stripes blazers for all. pic.twitter.com/p3dmKQlo2E

Last week, Jonny Gomes of the Red Sox ordered these spectacular Loudmouth Golf stars and stripes blazers for his teammates, and the team decided the President would look good sporting Old Glory as well.

The jacket certainly looked good on Gomes, who rocked the blazer during the team’s visit. Teammate Mike Napoli tweeted this photo of Gomes sporting the red, white and blue in fine fashion.

The stars and stripes jacket is available on Loudmouth’s website for the hefty price tag of $395. The company is famously known for its flashy golf apparel worn by top players such as John Daly, who helped Loudmouth’s open a new Loudmouth Grill in Orlando a few weeks ago. The Red Sox kicked off their 2014 season against the Orioles in Baltimore on Monday before traveling 39 miles south to 1600 Pennsylvania Avenue in Washington D.C. on Tuesday morning.