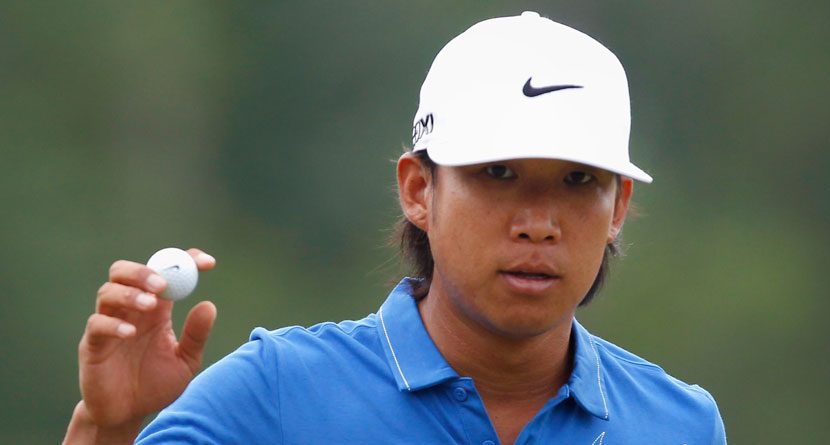 Anthony Kim’s disappearance from the PGA Tour is one of the game’s biggest mysteries. Why’d he leave? What’s he doing? Is he really injured? The questions will always be asked, and while his absence from golf has become less – shall we say – relevant, his name hasn’t been forgotten.

A ruptured Achilles tendon has sidelined Kim for essentially his entire career thus far. And although it’s a serious injury, it doesn’t take two years to recover from, does it? Sports Illustrated’s Alan Shipnuck may have given us the answer in his story on golf’s Houdini.

According to Shipnuck’s piece posted Wednesday, Kim spends much of his time in front of the TV watching golf … not playing it. He’s been spotted on the course a few times here and there – once by Phil Mickelson, even – but nothing to write home about. Why? Because Anthony Kim doesn’t need golf. He reportedly has an insurance policy that could pay him even more than Billy Horschel’s FedExCup payday. Here’s a part of the story from Sports Illustrated:

“The answer very well may lie in an insurance policy Kim has against a career-ending injury. An IMG source pegged its value at $10 million, tax-free. Kim’s friend, who has had financial discussions with him, says, “It’s significantly north of that. Not quite 20, but close. That is weighing on him, very much so. He’s trying to weigh the risk of coming back. The way he’s phrased it to me is, ‘If I take one swing on Tour, the policy is voided.'”

Assuming the friend’s figure is accurate, Kim would have to earn some $35 million on and off the course to match the amount he would collect by never playing golf again. (That’s factoring in taxes; agent’s commissions; private jets; diamond-encrusted belt buckles; salaries for a caddie, swing coach, short-game specialist, trainer, nutritionist and osteopath; and other expenses of the modern Tour pro.) For context, his career Tour earnings are $12.2 million, $9.2 million of which was accumulated between 2008 and ’10. Kim signed a blockbuster deal with Nike following the ’08 season, and his annual endorsement income peaked the following year at $6 million. If he can again be the player he was, he could make his $35 million nut with four or five good years. But that’s a very big if. “To say that he won’t come back because of money, that doesn’t ring true to me because he’s the most competitive kid I know,” says Knost. “I can’t imagine that’s what he’s thinking, unless something’s changed and he doesn’t want to play anymore.”

The story sheds light on what could be the very reason Kim isn’t on the course. If you were nearly $20 million to never play golf again, would you take it? Let’s be honest: probably. And Anthony Kim could very well have the same mindset as most of us.

Shipnuck goes on to explain how it’s not just the golf course that Kim is avoiding; it’s the public altogether. He supposedly doesn’t visit his favorite spots in the Dallas area anymore, and has even made his Rolls-Royce more pedestrian looking with stock rims.

His disappearance has always been a topic of conversation, but the news in this story is unlike anything we’ve heard about Kim before. The idea of a roughly $20 million insurance policy against a career-ending injury is insane, but is it worth staying away from the game for good?

I hope not, as should every golf fan. Kim would be welcomed back to golf with open arms. He had the potential to become one of the faces of the game, and it’d be great to see him back in top form again.

Be sure to read the whole story on Golf.com. It’s worth it.