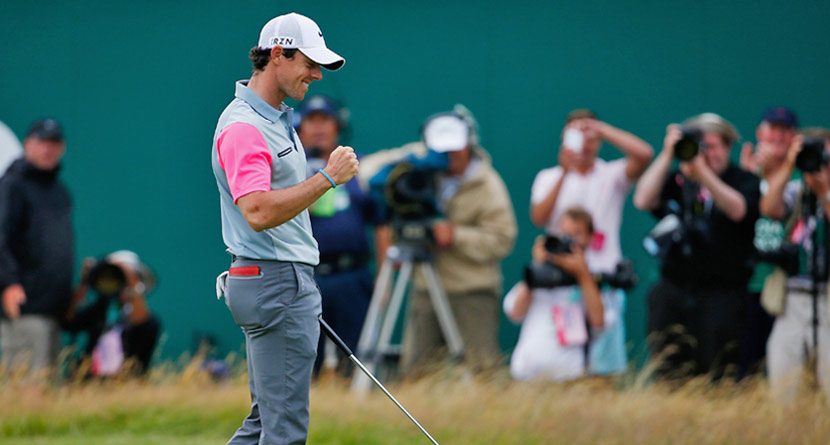 HOYLAKE, England — Has a new king been crowned?  While Tiger Woods was leaving Royal Liverpool after an Open Championship to forget, Rory McIlroy, the heir-apparent, completed a week he will remember for the rest of his life.

And so will everybody who witnessed it.

He finished with a 1-under-par 71 on Sunday for a 72-hole total of 271, 17 under par. Indeed, he was the only golfer in the top 10 who failed to break 70. Scoring on this final day was astonishing, but McIlroy had built up such a big lead over the first three days that nobody was ever going to catch him.

They say that no championship really gets going until the back nine on Sunday afternoon. McIlroy decided that he wanted to assert himself from the start. He pulled the driver at the first, split the fairway, hit an iron to 25 feet and rammed home the putt for an opening birdie.

It took him to 17 under par and increased his lead to seven shots. The Northern Irishman had laid down his marker. But Rickie Fowler is a terrier and came straight back at McIlroy at the second with a birdie of his own. Back to six shots.

Huge crowds had poured into Hoylake for the final round. They had all come to see McIlroy’s coronation. What they hadn’t banked on was for McIlroy to drop shots at the fifth and sixth. All of a sudden, his nerves were jangling.

But he showed what he is made off with birdies at the ninth and 10th.

By the time they had reached the par-3 13th, McIlroy was still 17 under, and now he was only three shots ahead. His nearest challenger was not Fowler but Sergio Garcia, thanks to birdies at the first, third and fifth and an eagle at the 10th.

McIlroy hit a shocking 7-iron to the 13th and was lucky to find a playable lie. He was able to find the green, but missed his par putt and, astonishingly, the seven-shot lead he held standing on the second tee had been reduced to two shots.

Garcia has come close many, many times and admitted only last year that he didn’t believe he had the game to ever win a major. With the wind as strong as it had been all week, Garcia was proving himself a master of the conditions.

Where most of the field continued to throw the ball into the air, the Spaniard was manufacturing shots, keeping the ball under the breeze.

His putting stroke has been his Achilles heel for years, but now, when it really mattered, he had the short stick under control. Five under par for the day, with so much pressure on his shoulders, was exceptional.

He had already finished second at The Open — back in 2007 when he lost a playoff to Padraig Harrington at Carnoustie — and he is desperate to break his duck. But had he left it too late?

At the 15th, Garcia put his tee shot in a greenside bunker, failed to get out and dropped a shot. McIlroy was three in front again. Barring an extraordinary finish, that third major was surely his.

Fowler, playing with McIlroy, birdied the 15th to join Garcia on 13 under, while the Northern Irishman, closer to the flag, had to settle for a par.

Up ahead, Marc Leishman of Australia set the clubhouse target at 12 under par thanks to an error-free 65. Graeme McDowell did his Ryder Cup hopes a power of good with a birdie-birdie-par-eagle finish for a round of 67 to move to 10 under.

Jim Furyk, the veteran American, was another who had a day to remember, a 65 taking him to 13 under.

Dustin Johnson had got himself into contention after two rounds, only to let it slip in round three. He knew that he had left himself too much to do to have a realistic chance and decided to go for broke. He hit some huge drives and did make progress, but not enough. However, at the par-5 16th, he managed to reach the green with a drive and a wedge.

However, he hit a shocking tee shot with an iron at the 17th and was a very lucky boy to watch the ball strike an empty grandstand miles to the right and rocket the ball 50 yards forward into a decent lie. His challenge came to a miserable conclusion when he hit his drive at the final hole fully 25 yards out of bounds.

Garcia, playing with Johnson, exchanged words with a spectator  at the 16th who had been heckling him throughout his round. It didn’t affect him unduly as he birdied the hole to go 14 under and narrow the gap to two again.

It was still McIlroy’s title to win or lose, but he knew that he couldn’t afford to make any mistakes in the closing three holes. A birdie at the 16th took him back to 17 under. Once again, the lead was three.

A birdie at the same hole for Fowler meant that he joined Garcia on 14 under.

Garcia wasn’t finished yet, however, and after watching Johnson strike the grandstand at the 17th, he struck a lovely drive and then put his approach seven feet from the hole. This wasn’t over yet, not by a long way. Sadly, Garcia couldn’t make the putt.

Standing on the 17th tee, McIlroy knew that four more good swings and The Open was his. He duly split the fairway, but then followed it with a poor approach into the rough by the right of the putting surface. A wondrous pitch saved his par.

With McIlroy looking on, Garcia played a fabulous iron approach to the par 5 to give himself the chance of an eagle. Fowler, staring McIlroy in the eye, ripped his drive 300 yards down the fairway.

McIlroy wasn’t about to rise to the challenge. Instead, he reached for an iron and he, too, found the short stuff. He could stand in the middle of the fairway and watch Garcia, in the group immediately ahead of him, make his attempt for an eagle. When he missed, we all knew that McIlroy’s third major was in the bag.

Garcia did, however, manage to birdie the hole. Had he been offered a final round of 66, he would have taken it.

Surprisingly, McIlroy chose to have a crack at the green and finished in a greenside bunker. Fowler, who finished second at the U.S. Open and fifth at the Masters, found the green with his approach. Two putts later, he was tied with Garcia for second place in The Open after a 67.

McIlroy nearly holed his bunker shot, and two putts for a par gave him the title. Seconds later, he was in the arms of his mother.

This was the day he answered all the questions. This was the day he completed the third part of a career grand slam. Is anybody willing to bet against him completing that slam at the Masters next April? Not this correspondent, that’s for sure.

And this was also the day that Gerry McIlroy, his father, collected on a 500-1 bet. When Rory was 15 years old, the elder McIlroy walked into a bookmaker and placed £400 on his boy to win The Open by the time he was 26.

“I feel incredible,” McIlroy said. “Today wasn’t easy. There were a few guys making good runs at me. To be three-quarters of the way towards a career grand slam at 25 is something I am very proud of. It will take a while to sink in.

“And yes, I would like to confirm that my dad did make that bet with some friends – and they will be delighted, I am sure.”

Fowler, a close friend of McIlroy’s said: “It is always enjoyable in that situation to play with somebody you like. I didn’t have my best game with me today, but I gave it my absolute best shot.”