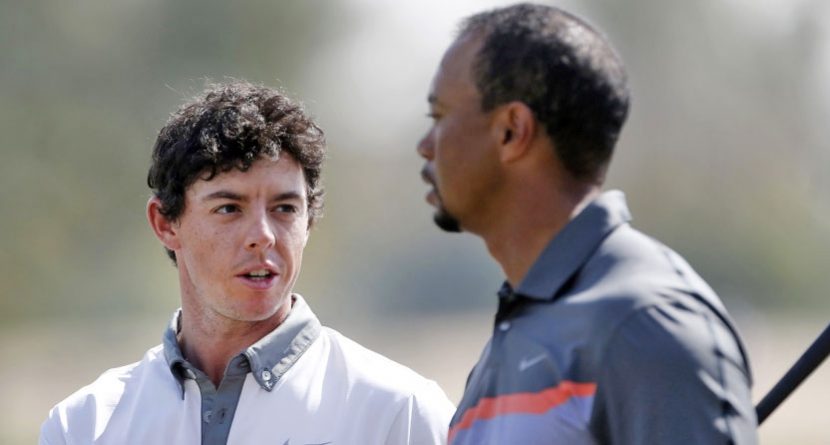 Rory McIlroy is more honest with the media than most of his fellow golfers. In fact, he’s more candid with the press than most athletes. So to some, it was a bit shocking earlier this week when he talked about Tiger Woods and Phil Mickelson being on the “last few holes of their careers.”

The reaction was immediate, and immediately McIlroy was confused. He posted to Twitter on Wednesday evening that he thought his “honest” answer was “very complimentary about the 2 best golfers of this generation,” and that there wasn’t “anything wrong” with his comments.

McIlroy said Thursday that he’s been harsher with the old man comments to Tiger’s face.

“I was going through Twitter last night and it was like, ‘Hold on, did I say something bad here?’ I don’t think I did. Look, I know Tiger and Phil really well. I get on really well with both guys. I’ve said much worse to Tiger before,” he said.

The men in question would have to agree with Rory’s “last few holes” assessment. Tiger will be 39 in December, and though he was the PGA Tour Player of the Year in 2013, he’ll admit he’s not the player he was a decade ago. Phil is 44, and though he said earlier this year that “the next five years are going to be the best of my career,” a man is not in his prime if he’s complaining about playing golf four weeks in a row. For the first time since 1992, neither Tiger nor Phil won a PGA Tour event this season.

Tiger and Phil may very well have some great golf in front of them. Both could easily win another major or two. But their glory years are behind them. And there’s nothing wrong with McIlroy stating the truth.

“I thought I was very complimentary,” McIlroy said. “I said the only reason Tiger wasn’t here (at the season-ending Tour Championship) was he didn’t have the opportunity. I wasn’t writing him or Phil off at all. … I didn’t say anything out of line or wrong.”

McIlroy was then asked if he thought he needed to explain his remarks to his buddy Tiger, with whom he recently spent some time on a media tour.